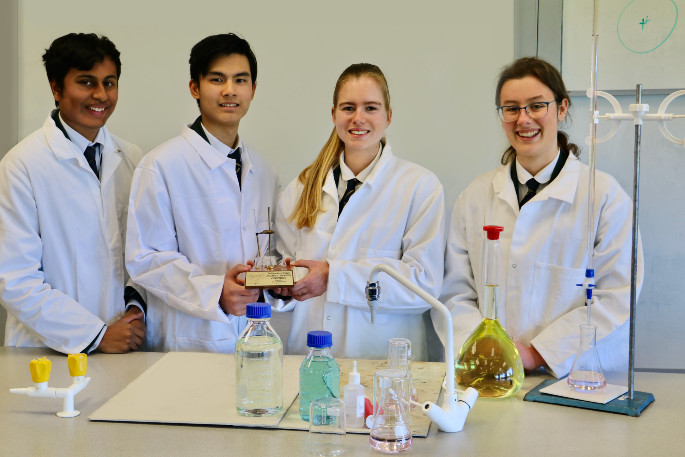 Aquinas College has won first place over 11 other Bay of Plenty and Waikato schools at a chemistry competition held at the University of Waikato.

The team of four Year 13 students won prize money and a trophy for their effort.

It involved them spending a day in a university laboratory analysing the makeup of a sample of zinc sulphate and then determining how many water molecules were associated with each zinc sulphate molecule.

It was a process that involved carefully using the equipment and information provided for the task, to get an accurate result.

Sponsored by the New Zealand Institute of Chemistry, the competition gives students a peek at the sophisticated resources of tertiary laboratories and the way the professors and technicians run them.

Student Janelle Dawber-Mair, 18, wants to study biomedical science next year and hopes to enter a career where she’s able to help benefit lots of people's lives.

“Being able to participate in some practical chemistry was a really fun and rewarding opportunity,” she says.

The competition allowed him to apply the knowledge he’d gained from school to solve a practical problem and reinforced his passion for chemistry.

“It’s helped prepare me for the undergraduate degree in chemical engineering that I’m pursuing next year,” he says.

Elise intends to go on and study engineering, while Daniel Nirmalaraj is planning a career in medicine.