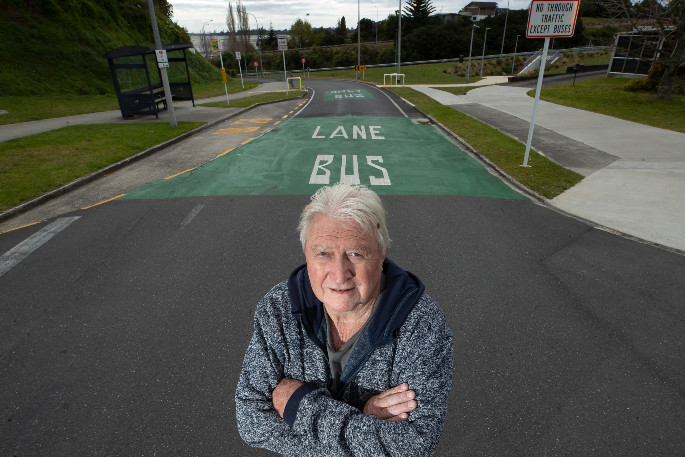 Graham Hopkins is surprised he will now be fined for using the Hairini Street bus lane after using it for two years.  Photo: John Borren/SunLive.

A Hairini resident would like to see the Hairini Street bus lane be dual use for residents outside of peak hours.

The bus lane at the end of Hairini Street has been in place for about two years but is illegally used by other vehicles to access Turret Road.

Graham Hopkins was surprised to learn that anyone using the bus lane will be fined $150 from the end of September.

“Why can't we share it after 9.30 in the morning? Because it's dead and there's always a break in the traffic coming down the hill when the lights at the top go red, there’s always a gap.

“It just seems so ironic to me that we can't share it at off-peak times.

Graham has lived in Hairini for six years and says use should be just for residents and not during morning peak hour traffic.

“You can't use it because it's too clogged coming down the hill. But after that it's safe and safe as anything.”

To access Turret Road residents need to go to the Hairini Street, State Highway 29A roundabout then the Maungatapu roundabout.

“It's just an inconvenience of having to go well over 1km up to the two roundabouts and then down the hill.”

He says before the bus lane went it in was about 100m from the end of his street to Turret Road.

Tauranga City Council director of transport Brendan Bisley says it has always been illegal for private vehicles to use the bus lane and council doesn’t intend to allow residents to use it because safety audits have recommended against it.

He says there has been an increasing number of drivers illegally driving down the bus lane which is why council plans to start issuing tickets.

“We’ve observed more than 200 vehicles per day on some days which has been increasing over time.

“Illegal use of the bus lane adds to congestion on Turret Road and creates safety issues for people who use the off-road cycleway that crosses the bus lane.”

Brendan says council is sending warning letters to offenders for the first few weeks of September and will then move to issuing $150 fines if use of the lane continues.

Council has cameras in place that operate 24/7 to monitor use of the bus lane and vehicles are automatically recorded as they drive down it with tickets issued from that footage, he says.

The lane is used by 53 buses every week day, including 12 school buses.

That is what it is. And no, I dont use it. Why dont they put cameras on 15th & Fraser, 15th & Cameron. Oh wait there already are cameras - NZTA cameras. There is the problem. Make your money off fining people jumping THOSE RED LIGHTS. There will be way more than 200 a day that can be fined I am sure. Go on TCC, give it a whirl why dont ya

They should just re-open the slip lane but anywayz...They still haven’t fixed the signage . They should say "Busses Only"! They only say "Bus Lane"! Bus lanes in the road code are able to be used by motorbikes legally. Unless signs say Busses Only! No other traffic. If any motorcyclists get pulled up there. you could try using this. https://www.drivingtests.co.nz/roadcode-questions/car/signs/bus-lane-only/. Rookie road planners. Sheesh.

Council should change times of use

What the council should do is allow traffic to go through during certain times of the day and also at weekends, similar to what is in Auckland during peak hours the road cannot be used but when its not it should be allowed I also don’t see the issue of cars using the lane before 6am as busses aren’t even running then nor are they after 9pm its stupid to shut residents off from their direct route to town when they originally purchased their houses with the road open to public but also if they are going to fine people they need to put signs up letting people know its a no exit what about people who are from out of town haven’t visited for a couple of years used to use that road and before they know it they are already going down it seams unfair to me

Rate-payers should really form a protest group and occupy all these council botch sites. But I know we are all busy earning money to pay for them as well as pay increases for Tenby and friends.

I have been in the morning traffic from Maungatapu going to Brookfield. Occasionally there has been a car using the bus lane. They merge in about half way down with no problems. The problem is at the top trying to get across when the space is taken up by cars coming from the left which could be going through Hairini. The short bus lane on fifteenth Ave has been changed back to a normal lane but nobody uses it.

this has been a bus lane for two years now. anybody using it should be fined. no excuse people using it are very selfish just trying to get a few vehicle lengths ahead. just causing more hold ups

Council is right on this one.

I catch the bus at Hairini once a week during off-peak times. Although some do turn around, there are often cars that run the bus lane. You can’t distinguish local resident cars from the general public.

Just open it back up to general traffic. Traffic is traffic. Busses...cars...etc. The concerns are no different. I think all us ratepayers would feel better if the council were honest and said..."We want to discourage people from using cars. We want them to use busses and that is why we have done another botch job on our local road layouts to make it that more difficult and therefore make busses slightly a more attractive proposition". (Although still by far a terrible option for almost all)

Get rid of this bus lane and others like it!! 53 buses per week compared with thousands of cars and other vehicles which could be using this every week. Council needs to stop catering for the minority and start looking after the majority. Bus lanes in general are a pain in this region - mostly empty buses taking up valuable space to allow the majority of traffic to flow better. People on buses should not have or expect the right to get from A to B on time........join the queue like the rest of us and put up with delays, which are caused mainly by incompetent Council members and road planners.

What ever happened to common sense?

To turn a whole section of road into a bus lane is just stupidity. I dont live anywhere near here but I agree that outside of peak hours it should be reopened to ALL traffic, not just residents only.

Stupid TCC closed it to traffic when they opened the underpath. Always think they know best, but typically stuff it up. Instead 29a remains congested between the 2 roundabouts. Open it back to traffic for a 6 month trial. Bet there will be no issues, and traffic will flow better.

so he’s been using it illegally for two years. he is a local so no excuse for not knowing the rules. people using this lane only hold up other road users and is very dangerous. no warning letter next time ticket. no excuses

what did Mr Parkes tell the people ,the council would have a meeting before ticket would come