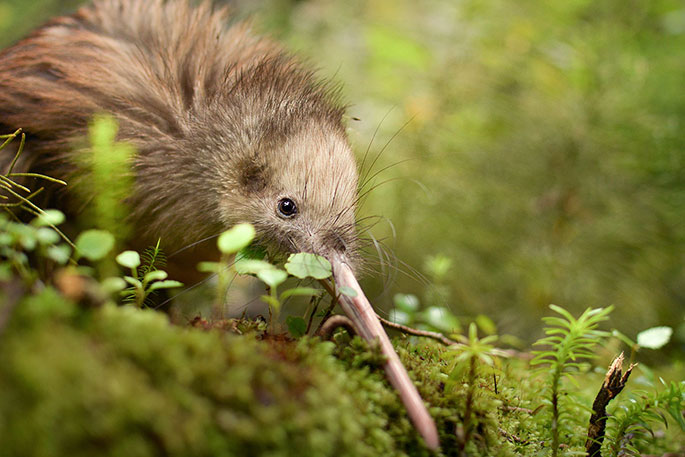 Jobs for Nature funding, as part of the Government’s COVID-19 response and recovery package, will see $19.7 million spread across kiwi conservation activities like increased predator control and Operation Nest Egg.

Charitable trust Kiwis for kiwi will manage the distribution of funds, which will create up to 100 new jobs.

Kiwis for kiwi executive director Michelle Impey says the organisation is proud to be entrusted with the funding which will enable kiwi conservation efforts all over the country to do more work, faster.

“This funding really validates the work that community- and hapū/iwi-led kiwi conservation groups on the ground are doing, day in and day out.

“The people and organisations that we work with are incredibly passionate about their mahi, but lack of funding limits how much they can do and how fast they can do it. More funding proves that their work is valuable and necessary, and empowers them to reach their goals faster.”

Today, NZ has around 70,000 kiwi. Where predators are being managed, kiwi populations are growing.

But the gains do not yet offset the losses, and despite efforts, kiwi numbers are still declining at two per cent annually – which means the country is losing around 27 a week.

Impey says this funding injection will help kiwi conservation groups to get ahead of that decline.

“The kiwi is genuinely running out of time – there’s no beating around the bush here. This funding enables our teams to get ahead of the decline by restoring more native habitat, making more of that habitat safe from predators, working with dog owners to keep kiwi safe from their canine family members, and breeding more kiwi to release back into predator-managed habitats.”

Minister of Conservation Eugenie Sage says the time is right to accelerate and scale up community and hapū/iwi kiwi restoration projects and create more predator-free land for kiwi.

“Only when large tracts of land are predator free will we see kiwi numbers for each species of kiwi go from two per cent decline per year to the Kiwi Recovery Plan’s goal of a two per cent increase per year.

“We also know that for long-term kiwi restoration and to reach New Zealand’s Predator Free 2050 goal, we need to work in partnership with private landowners.”

The Forest Bridge Trust’s habitat restoration project is one of many community groups that will benefit from this investment.

“Building on the work of local communities and private landowners such as iwi and farmers, The Forest Bridge Trust will use new funding of $8.5 million to create a 54,000 hectare predator-controlled bridge between the Kaipara Harbour and the Pacific, where kiwi can live without fear of predators,” says Sage.

“Funding from Jobs for Nature will help to speed up the work that The Forest Bridge Trust is doing and create at least 40 new jobs at the peak of the project to support it.”

“The Forest Bridge Trust team is incredibly passionate about working with local landowners to protect our local habitats and create safe, healthy habitats for some of our most vulnerable species,” says Tristram.

“We are proud to work alongside Kiwis for kiwi and local landowners who are as passionate about the cause as we are, and do our bit to reverse the decline in kiwi numbers.”

The new kiwi conservation funding covers five years and at its peak is likely to create up to 100 new jobs for community and iwi conservation projects including field operation, project management and administrative roles.

Kiwi conservation projects all over New Zealand have been invited to apply for funding, and Kiwis for kiwi along with other specialist kiwi practitioners are assessing applications.

New jobs associated with the funding will be advertised by the groups that receive funding.

Visit www.kiwisforkiwi.org for regular updates about which projects have received funding.

No jobs, no money, no hope, but at least we can kill a few more possums.