Improving water quality one native plant at a time 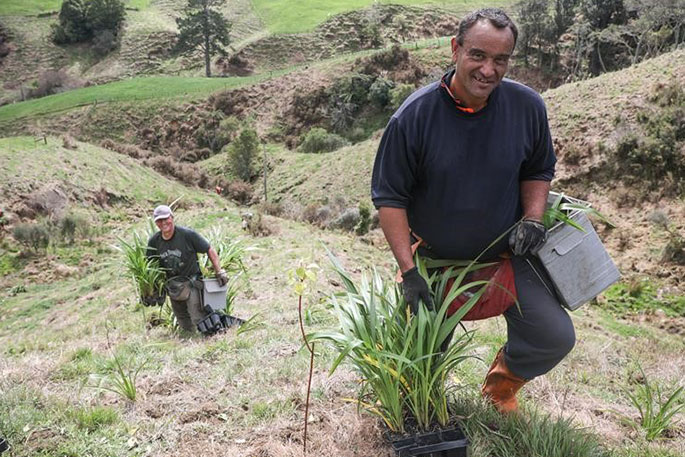 Dan Kerr has been helping plant the 30,000 natives on a property above the Kaiate Falls. The restoration project will improve water quality in the Kaiate Stream, which feeds into Tauranga Moana. Image: Bay of Plenty Regional Council.

The first of more than 60,000 native plants have gone in the ground on properties which sit above the Kaiate Falls, to help improve water quality and increase biodiversity in the Waitao catchment.

The plantings are the first of many, resulting from the nearly $1.5 million successfully secured by Bay of Plenty Regional Council through the Government’s One Billion Trees funding in August.

Bay of Plenty Regional Council estimates that more than 300,000 trees will be planted during the next four years on more than 250ha across the region because of the funding.

Bay of Plenty Land Management Officer Hayden Schick said at least 20 percent of the rural property in the Waitao Catchment, of which Kaiate Falls is part of, will be retired and 16 native species including mānuka, karamu and kanuka planted.

“Council has been working with local landowners and combining the best land management practices to reduce contaminants, including creating large riparian buffers as well as excluding stock from waterways and other risk areas,” he said.

More than 30,000 of the plants have been planted on waterways upstream of the falls this winter, with at least another 30,000 plants planned for planting next winter, he said.

The Kaiate Falls, on the Kaiate Stream, flow into the Waitao River which ends up in the southeast corner of Tauranga Moana, (Rangataua Bay).

“The falls area is a popular swimming spot in summer for locals and visitors to the Bay but there is currently a health warning in place due to high levels of E.coli bacteria in the Kaiate Stream,” Mr Schick said.

The recent planting work was another significant step in the right direction towards improving fresh water quality across the region, he said.

For more information about Focus Catchments in the Bay of Plenty visit the Regional Council website.