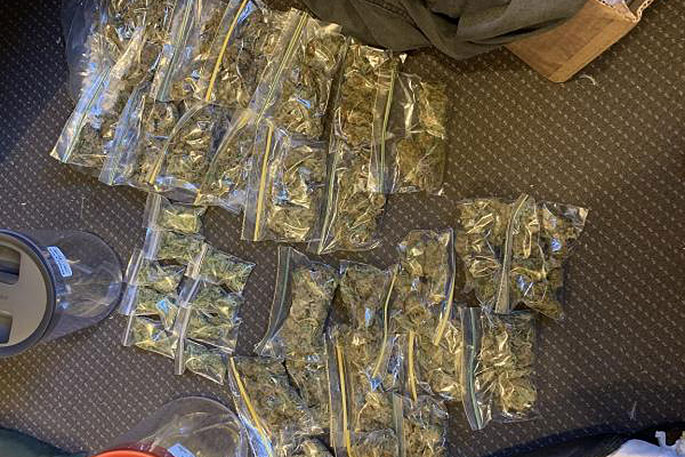 2.5kg of cannabis was recovered in raids in Central Otago and Queenstown in June. Photo: Supplied/Police

Annual Ministry of Justice figures show methamphetamine remains the biggest drug taking up time in the courts - with 8182 charges laid in the last financial year.

In those 12 months 65,000 adults were charged with at least one offence of any type, the annual count shows. And a trend of low conviction rates for rape charges was repeated.

Cannabis charges have decreased 63 per cent since 2010, which Chris Wilkins believes is part of an ongoing trend reflecting changes in the way the justice system responds to the drug.

Wilkins, an associate professor at Massey University's SHORE & Whariki Research Centre, has been researching drug trends for the past 20 years.

Since 2010 "we've added diversion, pre-charge warnings, and also there's general decline in the willingness of police to arrest people for just possession charges," he says.

"And part of that is that they refocusing onto methamphetamine, so it's not surprising to see cannabis use charges declining quite significantly and methamphetamine increasing."

There were 5233 charges laid for Cannabis offences in the 2020 financial year, while methamphetamine offences shot up another 18 percent on the previous year, to 8128 charges.

Wilkins says the increase in charges related to methamphetamine is due to a massive increase in supply and availability. And record busts by police have been matched by a substantial decline in price.

Just over half of those convicted of offences related to methamphetamine received a community sentence such as home detention, community work or supervision.

Wilkins says that's in line with the government's health focus on drugs, which directs police to only arrest people if it's in the community interest.

"There's now a movement away from arrests for drug offences and punishment like prisons, and more a health focus.

"So I expect some of that is reflecting that even when people do get arrested that they are more [often] directed into treatment solutions, and that might involve home detention to some extent, but also non-prison kind of penalties."

The Justice data dump also shows conviction rates for sexual violence are still far lower than other types of offending.

In the 4819 charges for sexual crimes only half resulted in a conviction. And of those charged 54 percent were for offences against a child.

Kathryn McPhillips is the executive director of Auckland's HELP foundation, which supports survivors of sexual violence; she is troubled by the rape conviction rate, which sits at just 39 per cent, and says there needs to be changes to consent law.

"We need to line it up, so that ideas about what's a reasonable belief in consent match what we expect sexual relationships to be; which is enthusiastic, mutual, and yet those are not the kind of things legal decisions are being made on."

The Ministry's data also reveals police laid 30,177 family violence charges in the 2019/ 2020 financial year. Conviction rates in this area equal about two out of every three charges.

Almost half of family violence charges were for assault, although property damage and harassment also featured regularly.