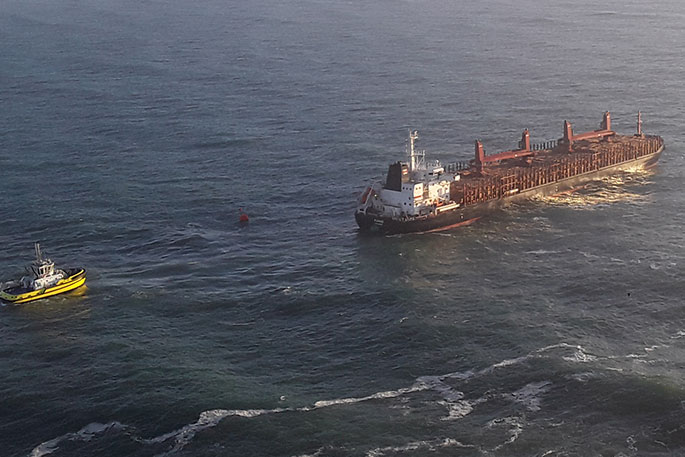 The Master and Chief Engineer of the log-carrier MV Funing, have been sentenced and fined after admitting charges relating to the grounding of the ship at the Port of Tauranga in July.

This followed an investigation by Maritime NZ after the Singapore-registered ship lost power and passed over a channel marker with the propeller becoming caught in the markerchain, before making contact with a sand bar in the Tauranga Harbour channel.

The Master was fined $3250 and ordered to pay $130 court costs, after pleading guilty to one charge under Section 65(1)(a) of the MTA, of operating the vessel “in a manner which caused unnecessary danger or risk to other persons or property, including the passengers and crew of the MV Funing”.

The Chief Engineer also admitted one charge under section 65(2)(a) of the MTA, for causing or permitting the ship to be “operated, maintained, or serviced, in a manner that caused unnecessary danger or risk to any other persons or property, including the passengers and crew of the MV Funing”.

The maximum penalty for both charges was 12 months’ imprisonment or a $10,000 fine.

“Following a series of checks on the engine of the Funing prior to its departure from the Port of Tauranga, a problem was found with the fuel quantity pistons,” says Maritime NZ’s central region compliance manager Michael-Paul Abbott.

“At this time, the wind was gusting 15 to 30 knots (28-56km/h) with the wave height approaching 4m and rain had reduced visibility.

“The problem started when one of the engine’s fuel quantity pistons indicated an error, which means that if this isn’t addressed, the engine’s power will be reduced – which is power it needs when exiting the narrow harbour entrance.”

In the hours leading up to the engine failure, the Chief Engineer tested the affected parts a number of times, each time triggering an alarm suggesting the problem had not been rectified.

The decision was then made to override the mechanism that automatically slows down the vessel in the event of a problem with the engine, as an attempted precautionary measure.

“The Pilot subsequently came aboard around midnight and the master handed him the Pilot Card which indicated that there were no issues affecting a safe departure.

"But as the ship tried to increase speed on leaving Port, the Chief Engineer realised there was still a problem with one of the fuel quantity pistons and that the engine was not responding with the shift to ‘full ahead’ (full power).

“The Pilot asked the Master several times why the ship was going slowly, but did not receive a clear explanation.

“As a result, the No. 2 engine cylinder lost all power, and during this time the wind and swell had increased. At 12.43am the Pilot called the tug boats to come and assist and the Master ordered the anchor to be dropped.

The main engine stopped after the propeller became entangled with the channel marker while the stern swung around and came into contact with the sand bank.

“The tugs then turned the vessel into the deeper channel water and held it there until it could be towed into safer anchorage.”

There it remained until July 14 when it was towed into port.

Michael-Paul says the Maritime investigation and subsequent prosecution proved that the Master knew there was an issue with the main engine prior to departure and failed to notify the Pilot that there was a problem.

The Chief Engineer was also proven to have failed to retest the main engine to ensure it was operating on all five cylinders after attending to the fuel quantity piston error.

The Funing is currently being towed back to Singapore which is expected to take around 40 days.