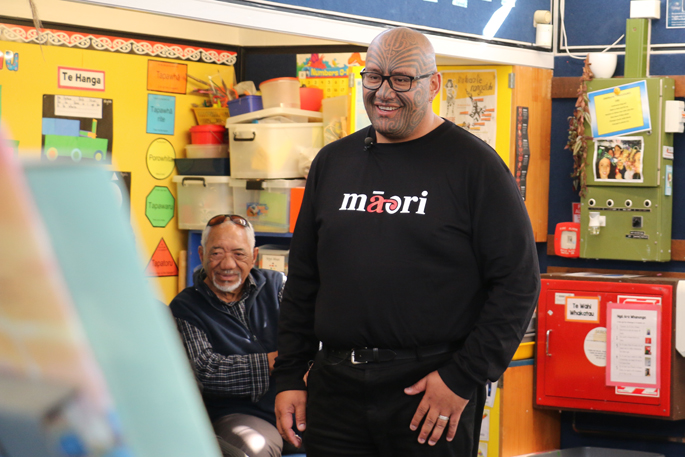 The Māori Party has announced a raft of plans to help te reo Māori become further recognised as the indigenous language of Aotearoa.

The policy sets out to ensure New Zealand’s name is changed to Aotearoa and that all Pākeha place names, cities and towns will be replaced with their original ingoa Māori by 2026.

Waititi says the bold move will help elevate te reo Māori to its rightful place, in a system that has “long undervalued its significance”.

"It is time that our children know they are growing up in Aotearoa, which is a pacific nation. It is not a European nation," says Waititi.

"We want to change Towel-wronger back to Tauranga. You also have places like Hamilton – Kirikiriroa and Gisbourne – Tūranganui-a-Kiwa.”

He addressed a packed-out classroom of students and teachers, speaking about how colonisation has resulted in a steady decline of te reo Māori in Aotearoa.

“That’s the reason why there has been a huge decline in our te reo Māori. So we are working really, really hard to ensure that te reo Māori is taken to its rightful place as the indigenous language in this country.” 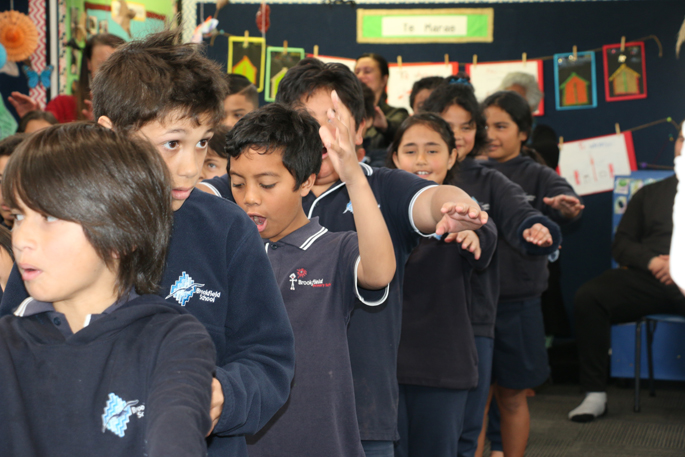 The policy would require all primary schools to incorporate te reo Māori into 25 per cent of their curriculum by 2026 and 50 per cent by 2030.

He says it is unacceptable that only 20 per cent of Māori can converse in te reo Māori, which equates to three per cent of the population.

“It’s a bold move but we must put a pou in the ground.

“We are in a sad state of affairs. We want this to be a living language not just for Māori kids, or Māori people – but for all of Aotearoa.”

The policy would also see te reo Māori and Māori history become core curriculum subjects up to Year 10 at secondary schools across the country. 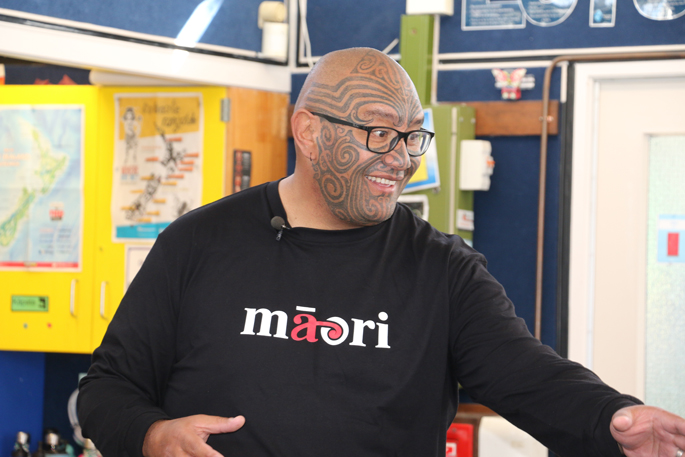 The policy has been described as a bold move to help ensure that te reo Māori is taken to its “rightful place” as the indigenous language in New Zealand. Photo: Dan Campbell.

“If you know the history of Aotearoa, then you know the struggles that our people have had to face over many years.

“If people understand that, then they are more sympathetic and empathetic to what we have to do in trying to revive the language and to revitalise the culture.”

The party would invest $50m into the establishment of a Māori Standards Authority.

The independent statutory entity will audit all public service departments against cultural competency standards, including the monitoring and auditing of language plans.

State-funded broadcasters would also be required to have a basic fluency level of the language.

“It is absolutely unacceptable for broadcasters in mainstream media to be butchering te reo Māori.

"No more will we be listening to the news or the radio where people are murdering our language and murdering the pronunciation."

“We are going to claim another three weeks.  Like the incoming tide, we are just going to take things back gradually because we are kind.”

... is NOT the way. Maori culture and Te Reo are an important part of our heritage for all of us who were born here and for others seeking to be become citizens. It is right and proper for funding to go to this and for ENCOURAGEMENT of promoting Maoritanga. But this is a very sad way to do it and trying to force people to do it by playing the guilt card about the terrible history and suppression of Maori is NOT any way to get a successful conclusion. This IS a "European" society as well as a Pacific one. We need to recognize and respect ALL the ethnicities living here and let people choose whether they call it "Aotearoa" or "New Zealand" (with both being equally acceptable.) If this is Maori Party policy, very few people will take them seriously.

They're Right After All

Racism is ripe in New Zealand.

Several years in the political wilderness and this is the headline policy. Just a bunch of anarchists militant no hopers with a chip on their shoulder.

...quite disappointing to Turiana Turia and Pita Sharples if this is the sum policies of the new Maori party.....

What a load of twaddle

No one can say their history is better or more important than others. Colonial history is not going away and if I choose to learn a language it will be one that is useful to me. My country is New Zealand not Aotearoa and the flag has a Union Jack on it. End of.

Big plans in terms of spending, could somebody from the party explain where this money is coming from.

If you have to go to initiatives such as these to preserve a language or culture - it’s already dead.

Surely the rightful place of te reo Maori is the second language of New Zealand? It’s a nice language. I’m happy to try and learn a bit, even though I’m a bit old in the tooth for any language learning. But come on, get real. Tourism is our biggest earner. Let’s not make it difficult for people who visit.

well there’s not much chance of that happening

To the max. Have they chosen to forget white Europeans live here as well. We recognize everyone - WAKE UP. This is New Zealand not America. Stop the American crap. In New Zealand everyone matters. We ALL bleed red.

The Maori Party are unlikely to ever Govern this country. When looking at their full policy, they make no mention whatsoever about what they will do for the non-Maori New Zealander. At least the major parties do something for everyone in NZ. Under the Maori Party, this country would become very racist....more than it is now. It would be all about the Maori.