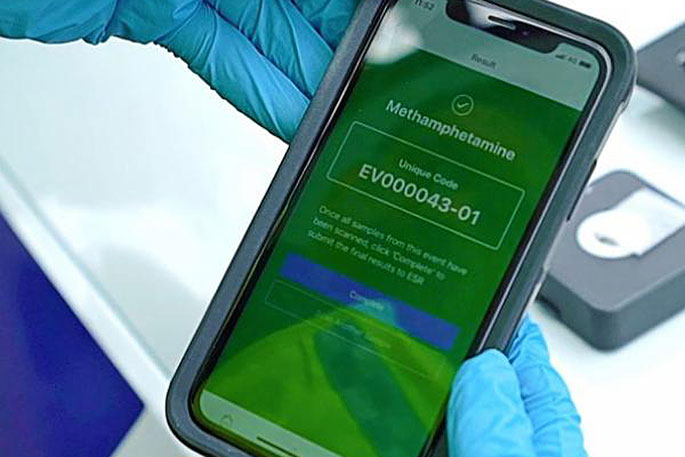 Police and ESR are pleased with the promising results received to date since the launch of the Lumi Drug Scan (Lumi) pilot in July.

Results up until September 4, show that Lumi has been used by frontline Police staff in Counties Manukau and Central Districts at 68 different events.

130 different items have been scanned and on 37 occasions Methamphetamine was identified.

“The results from the initial stages of the pilot are very encouraging, with dozens of incidents where our frontline officers on the streets have identified Methamphetamine through the use of Lumi.

“The real-time screening tool gives our officers confidence in knowing what they’re dealing with and is proving to be an effective tool to help our staff make better informed decisions at the scene.”

ESR Forensic Research & Development Project Manager Dion Sheppard says ESR is pleased with how the Lumi pilot has started, and how these results are supporting frontline police.

“The expansion of the Lumi pilot to Canterbury enables more Police to access the benefits of Lumi’s cutting edge technology, developed by New Zealand scientists, and supports their efforts to reduce the harm that illicit drugs cause in our communities.”

He says a new drug detection model has recently been added to the service by ESR that now allows MDMA samples to also be screened by Lumi.

“Our scientists are continuing to develop Lumi and in the past week we have expanded its capability by adding a new drug detection model to the service, enabling MDMA samples to now be screened by Lumi, alongside Methamphetamine and Cocaine.”

The MDMA model has been developed from a data set containing over 15,000 instances, and the results from the validation undertaken by ESR have determined its accuracy to be 97.7 per cent.

The three drugs are the most common and harmful drugs in the New Zealand market.

The trial is running across Tāmaki Makarau, Central and Canterbury Police Districts over a six month period.