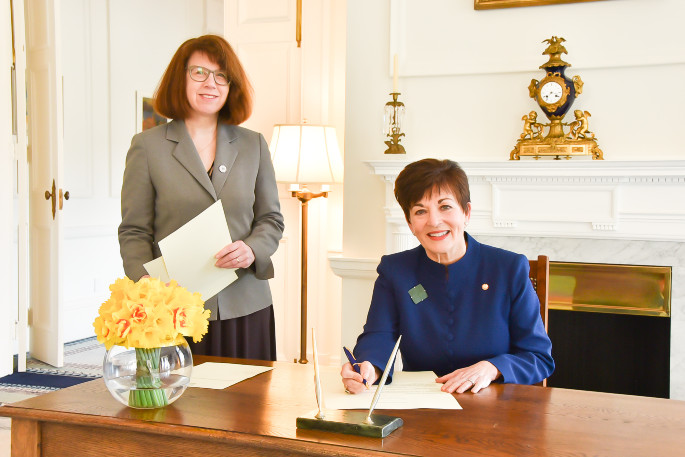 The Chief Electoral Officer, Alicia Wright, with The Governor-General, Her Excellency The Rt Hon Dame Patsy Reddy, at Government House for the signing of the writ. Photo: Supplied

Today is writ day, a milestone on the election calendar when the formal writ is issued for the 2020 General Election to be held.

The Governor-General, Her Excellency The Rt Hon Dame Patsy Reddy, signed the writ at Government House today directing the Electoral Commission to conduct the General Election on Saturday October 17 2020.

“The issue of the writ is a key constitutional step in the election process. It sets out the dates for candidate nominations to close, election day, and the date the writ must be returned showing the successful electoral candidates,” says Chief Electoral Officer Alicia Wright.

Under the Electoral Act, the writ must be issued within seven days of the dissolution of Parliament, which took place on Sunday September 6.

The Electoral Commission must return the writ with the names of the successful electorate candidates to the Clerk of the House of Representatives within 60 days of its issue, by Thursday  November 12, if no application for a recount is received.

A full list of parties and candidates is expected to be publicly available from www.vote.nz by 2pm, Saturday September 19.

Other key events triggered by the issuing of the writ are the electoral rolls close for printing; all voters enrolled after this date cast special declaration votes; and candidate and party television and radio advertising may start.