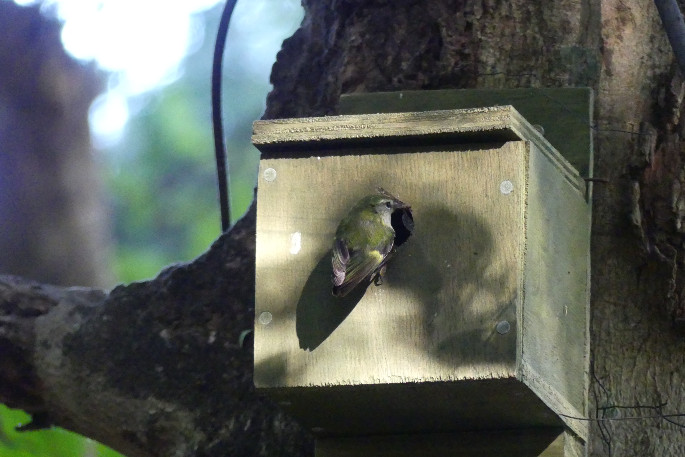 A titipounamu/rifleman making use of a nesting box. Photo: Barry Pethybridge

In the lead up to the titipounamu/rifleman’s nesting season, it’s not uncommon to find Barry Pethybridge in the Aongatete forest sitting in a camping chair, camera and tripod in hand, waiting for the native bird to make an appearance.

He’s collecting data about titipounamu for the Aongatete Forest Project by monitoring the 75 nesting boxes that he, and other Forest Project volunteers, have made and placed throughout the forest.

“I’ll sit out there for hours just observing them,” says Barry.

“There’s very little, if any, research about them in the Bay of Plenty.”

This is because titipounamu weren’t sited in Aongatete, a lowland forest in the Kaimai Range, until 2013.

The species is thought to have been living in the upper Kaimai for many years prior to their discovery in Aongatete.

“They must have been surviving in conditions so cold and dismal that even the rats and possums didn’t want to live there.

“After 16 years of predator control, the rifleman population in Aongatete has gone from zero, to an estimate of 85 birds.”

The nesting boxes provide titipounamu and their chicks a safe haven, not just from predators, but from other birds – including Tui.

“Rifleman do get bullied by some of the bigger, more aggressive birds.

“That was taken into account when we designed the boxes three years ago. The entry hole is only 2.5cm, and the entire box is only 12 by 12cm.”

Barry looks forward to when titipounamu are “in your face” when walking through the Aongatete Forest.

“Rifleman have a very high pitch sound, so I can’t hear them, but young people can. Hopefully we’ll eventually be able to take school groups through and the student will be able to see them, not just hear them.

“The rifleman is our famous little bird that no one ever really gets to see.”