No symptoms, no need for test 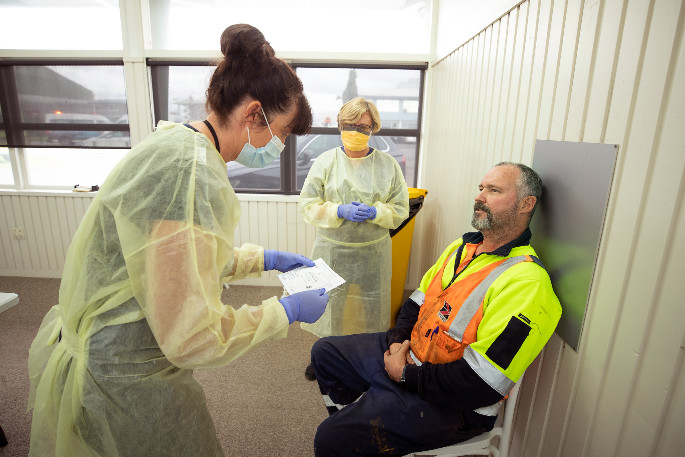 Mike Todd talks to testing staff at the Port of Tauranga before his Covid-19 test. Photo: John Borren/SunLive.

There’s no need to subject yourself to the discomfort of a test unless you have symptoms.

This is the message from health authorities about COVID-19 testing.

Josh went to get to get a test because he had been in contact with someone who had respiratory symptoms and was tested for COVID-19 but was told he and his workmates would be charged $234 each for the tests because they are asymptomatic.

He says they were trying to do the right thing and were a little disappointed to be told it would cost after going to Second Avenue Health Care.

Second Avenue Health Care business manager Dave Gilbert says people need to call their GP or Healthline for advice before going in for a test.

He says as per Ministry of Health guidelines they are passing on the cost of a test to businesses who want to get employees tested regardless of whether they have symptoms.

“Unless you're symptomatic there's no need to be tested unless of course Public Health call you.”

Dave says if people are contacted by Public Health or the contact tracing team asking them to get a test then they need to follow advice.

He says there has been a huge increase in people seeking tests at their practice.

The most important thing is if people are unwell then they need to isolate especially if they are waiting on a COVID test, says Dave.

“Don’t go cruising through the local store or café while you’re waiting; there’s a chance you could infect someone else.”

Bay of Plenty District Health Board incident controller Dr Joe Bourne says they have seen a dramatic increase in the number of people presenting for COVID-19 testing, and are encouraging only people who are symptomatic to seek tests.

He says appointments or tests for suspected COVID at GPs or accident and healthcare are free, provided people are symptomatic or have been given the directive to get tested.

“There may be a charge if a business or organisation asks their staff who are asymptomatic to get tested, unless this is a requirement from Ministry of Health, such as with the Port of Tauranga workers.”

The Port of Tauranga carried out testing of 720 high priority port workers as directed by the Health Ministry and all the tests were negative.

I’m a ’kiwi living in the worst covid place in the world’. Ie. florida. The a symptomatic youth here party hard, spread it among themselves, Then go home and give it to us seniors, and we die. NZ has a worldwide good reputation for handling it well. Don’t let some idiot ruin it

Mass testing is very desirable in any size population, but even more so in larger populations where the probability of undetected clusters is higher. There has been some mass testing carried out in the South Island to get data on its effectiveness and it is a useful (if expensive) tool in the fight against Covid. As testing kits get smaller (cheaper), quicker, and able to be self-administered (just like a pregnancy test) it is likely that much more of the population will test. I have seen nothing to justify your paranoia about MOH or the Government; we have a fantastic example of transparency here with information freely available and reports daily on what is going on. They are right to be concerned about misinformation, conspiracy theories, and rumor. All of that undermines the real efforts being carried out.

Testing is free for people with symptoms or who have been required to have a test. So, if most of us need to get tested, it will be free. (It isn’t really, of course, we all pay for testing through our taxes...) Although mass testing is desirable so that as yet undetected clusters can be detected, it has to be balanced against the need to test higher priority subjects, such as people turned up through contact tracing and people with symptoms of the disease, and the resources in terms of trained people and equipment that we have available. There are new, quicker, and less invasive tests becoming available and this will make mass testing more viable than it currently is. There is no evidence (at least, that anyone is admitting to...) that NZ has insufficient resources to meet our testing demands. Around 700,000 have been tested.

This is going against international evidence and best practice. Studies have shown that there are many many more asymptomatic people than confirmed cases and that these can pass on the virus. It is why China did mass testing in Whuhan. It is why the UK is hoping to start mass testing. Other countries have done mass testing. “Test test test” the man said. Is NZ running out of money and test kits? I suspect we won’t get the truth from the MoH and the Government because they are more concerned with trying to class everything as misinformation if it doesn’t come from them, rather than being truthful with the public.

This is not what I understood, I was under the impression that the test was free.

Can Carriers of a disease be Asymptomatic?