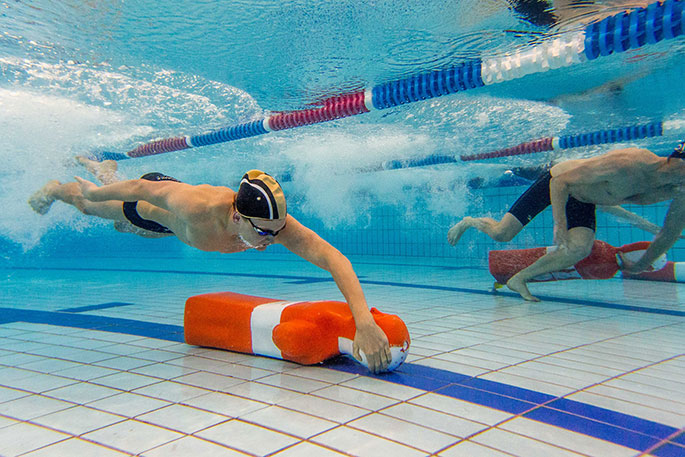 More than 165 swimmers will compete in this weekend's Eastern Regional pool rescue championships in Hamilton. Photo by Jamie Troughton/Dscribe Media

Organisers have had to get COVID-creative ahead of surf lifesaving's Eastern Regional pool rescue championships in Hamilton this weekend.

COVID-19 restrictions, however, have limited the number of people that can gather at an event to just 100.

And with time-keepers, officials and coaches also present, it's added a touch of exclusivity to proceedings.

"What we've done is limit the number of competitors at each session to just 65, dividing each session up into the different age-groups," Surf Life Saving New Zealand Eastern Region sport manager Mark Inglis says.

"All three sessions are at capacity, while we've had to turn away more than 60 athletes from other regions. While it creates a bit more organisation, it's fantastic that we're able to provide some competition for our event-starved athletes."

Hamilton's Waterworld are sectioning off the venue's 50m pool, opening a side entry so competitors are socially distanced from the rest of the complex, although many Northern Region athletes were ineligible anyway, with Aucklanders limited further on the size of events they can attend.

All events are modelled off those on the world championships, with this year's world titles - which were to be held in Italy - now postponed until next year.

Pool rescue events allow beach-based lifeguards to train all through winter, so they hit the summer season in peak physical condition.

Bay of Plenty clubs Mount Maunganui, Omanu, Papamoa and Whakatane provide a big chunk of entries for the weekend, with Mount's 62 athletes up on last year and bolstered by a large contingent of masters. Papamoa (29), Omanu (27) and Whakatane (24) have the next biggest teams, with a group coming up from the three Gisborne clubs and a number coming from Coromandel's Whangamata and Waihi clubs.

Teamline director Lindsay Campbell says it's an easy decision to support the event.

"The fit and firing lifeguards who turn up on the beach every summer have usually put a whole lot of work in over winter to get there," he said. "We're delighted to support these pool champs, as it recognises and rewards those lifeguards who've put in that extra effort to help save lives."