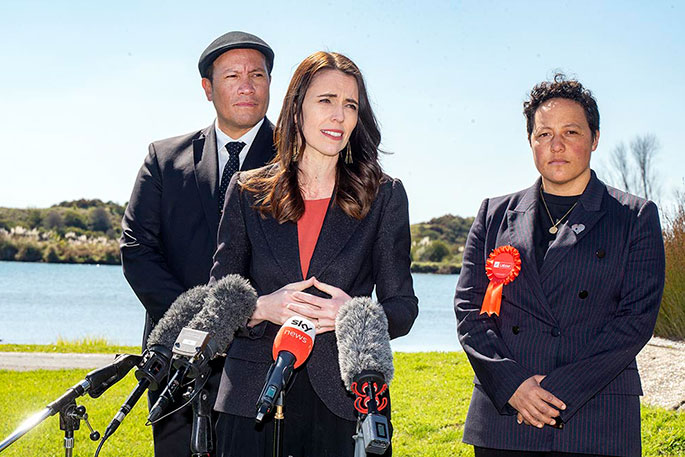 Nine months on from Whakaari, Prime Minister Jacinda Ardern said the first scenes she saw of the first responders at work still lingered in her mind.

She says she also has strong memories of visiting victims in hospital and to hear how well they had recovered was “heartening” and a “real tribute” to New Zealand’s healthcare workers.

The Prime Minister spoke to first responders on the nine-month anniversary of the Whakaari eruption, before moving to Te Puna Ora o Mataatua to speak to those on the Covid-19 front lines and finishing her tour at the Whakatane Mill.

She says it was her first chance to come back and visit those who were first on the scene of the tragedy and to support them and the victims of Whakaari nine months on.

“In and amongst everything this is a really tight-knit community and they are continuing to support each other with the double-whammy of COVID as well.

“I really do believe that this happened in a community that is so tight-knit, that has such strong support networks within it, where people know one another has made a difference and you can see and feel it. It was incredibly traumatic for those involved.”

Ardern says she has received letters from victims who say the support given to them by Ngati Awa had aided them in their recovery.

While, Ardern was not solely in town to focus on White Island, the point was reinforced by National leader Judith Collins who says a Royal Commission into the disaster should be launched.

“I think it’s something New Zealanders would want to see,” says Collins.

When asked if it was appropriate for a Royal Commission of Inquiry to be launched, Ardern says the WorkSafe inquiry was still under way and needed to take its course.

“We need to let them do their job.

“It feels we would be duplicating their work, and answers that will be provided by that inquiry. There are lessons to be learned and that needs to come from those who are in a position to look at all the evidence and that is the WorkSafe inquiry.”

She says WorkSafe, coupled with the coroner, will get the answers that the community needed.

Ardern says the tragedies which had punctured the past three years are now part of her DNA, as well as New Zealand’s.

“There has never been a moment that I have ever lost hope and I say that experiencing alongside New Zealand a terrorist attack, a volcanic eruption and a global pandemic, I have never lost hope."

Please stop pulling that face. I’m not buying it.