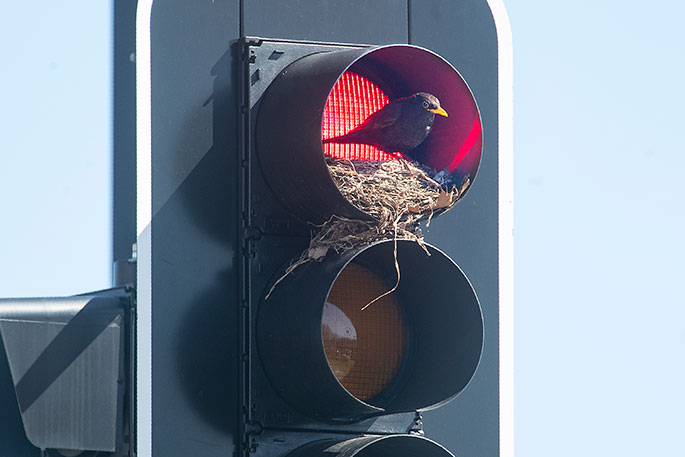 The blackbird nesting in the red traffic light in Greerton. Photos: John Borren/SunLive.

Waiting for traffic lights to change from red to green provided Jannine Spiers with a brief moment to take a second look at an unusual sight.

Perched happily in a nest, a blackbird has established her new home inside the top red light of a set of traffic lights at the Cameron Rd pedestrian crossing.

“A bird has moved into a red light district,” says Jannine. “She looks so cute and fluffing herself. She’s right pleased with herself.”

Jannine had left home, and was heading towards Pyes Pa along Cameron Road, when she came to a stop at the lights.

“I was just waiting for the lights to change and she sort of fluffed up her feathers, and I was like, ‘hang on a minute - there’s a bird in there!’”

Jannine thinks the nest was built quite quickly.

“I drive through there every morning. She must've been really slowly building it up because there’s a decent amount of straw in there. She’d obviously been planning it.

“I hope the council people don’t come along and turf her out. Someone will probably complain that they can’t see the light, you know what people are like, they like to complain about something don’t they. So don’t build it too high girl. You can still see the red light easily.”

Jannine saw the blackbird, which she’s named Whero meaning ‘red’, about 11am on Tuesday.

“I went that way in the morning and never noticed it. Whero’s very cute, fluffing up and preening herself. She’s looking very pleased with her new home.

“We don’t want them to come and evict her. We could think up some good names for the babies.”

SunMedia photographer John Borren stopped by to take some photos.

“It must be so warm in there with that light,” says Jannine. “The perfect little incubator.”

The NZ Birds Online website states that blackbird eggs are laid from August to December. Three or more clutches of three to four greenish-blue eggs may be laid during a season. Incubation is shared by both sexes and takes 13-14 days. 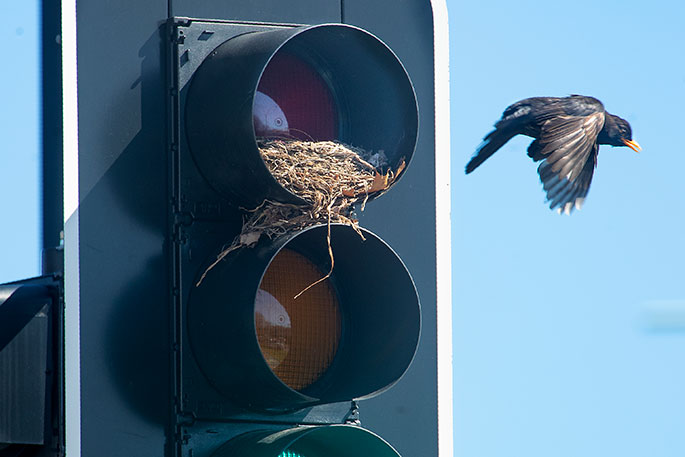 The Eurasian blackbird was introduced to NZ from 1862. They are now our most widely distributed bird species throughout mainland New Zealand and off-shore islands from sea level up to about 1,500 m altitude, with a lower maximum altitude in the south.

They occur in urban areas, farmlands, orchards and in lowland indigenous forests, being most abundant in urban gardens, parklands, farms and orchards. Blackbirds are also resident on most vegetated islands including Kermadec, Stewart, Chatham, Snares, Auckland and Campbell Islands; they occur as vagrants on Antipodes Island.

Adult males are entirely black apart from their yellow bill and eye-ring.

Females and juveniles are mostly dark brown, slightly mottled on the belly. Blackbirds are common in a wide range of habitats including suburban gardens, farmland, woodlands and indigenous forests. Their song is given from winter to summer, with the singing male usually perched on a high branch, tree top or power line.

They sing most in the early morning and evening. Blackbirds feed mostly on the ground on earthworms, snails, and insects. They also take berries while perched in foliage.

Why did Whero decide to take up residence in a red traffic light?

"I'm no expert on imported species but the bird would have had to have weighed up the options,” says Western Bay Wildlife Trust Petrel Specialist Paul Cuming.

“The species' survival in New Zealand gives clues as to its intelligence to weigh up nesting in a garden with the nest constantly raided by cats and rats. This versus the relatively benign site it has chosen seems apparently obvious.

“The reason it chose the red light may be related to the fact that the majority of birds don't react to the colour red, particularly on the infrared spectrum. This is proven by known science and our night work with seabirds, penguins and kiwi is conducted with our torches covered with red filters.”

Once chicks are hatched, they are ready to fledge at 13-14 days but if disturbed can leave and survive as early as nine days old.

This ability to fledge early is an important anti-predator adaptation.

Jannine says that drivers can still see the red light.

“How hard case that she’s built her nest there,” says Jannine.

That is such a cool photo. Hope it gets to stay. No harm at this stage.

Given the relatively short...

...time it takes the eggs to hatch and the birds to leave the nest, and given that the red light is still easily visible to us Humans, there might be a case for delaying removal of the nest. They could put TCC on it, and by the time they have formed a committee, had a few shouting matches, and finally signed a work order for removal, then actually got it done, the birds would be long gone.