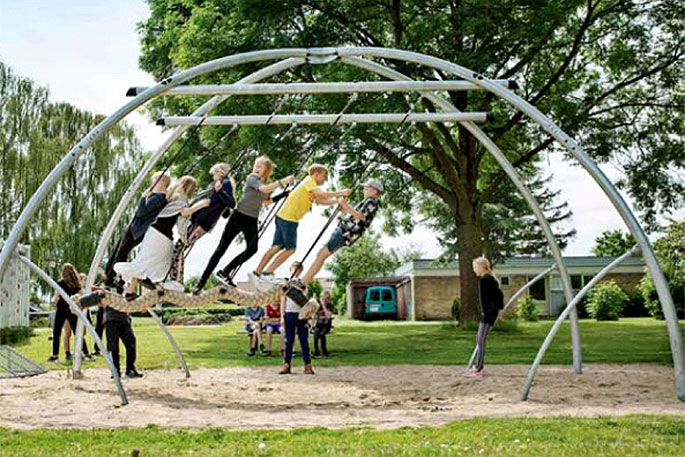 An example of a pendulum swing. Supplied image.

Omokoroa is to get a new destination playground following approval of the $1.04 million development to replace the existing outdated playground on the Domain foreshore.

Western Bay of Plenty District Council’s Policy Committee this week approved the development of the destination playground which will be part of a total revamp of the surrounding Omokoroa Domain and Esplanade, in partnership with the community and local tangata whenua Pirirākau hapū.

The new playground, which will include swings, trampolines, tunnels, climbing structures and a hamster wheel, is the result of an extensive 18-month community engagement period with tangata whenua, representatives of the elderly, health and disability communities, local businesses and the five local schools within Pirirākau’s rohe – Omokoroa No 1, Omokoroa Point, Pahoia, Whakamarama and Te Puna.

The schools’ involvement was key to the final concept plan as pupils took part in modelling their own creations of what they envisioned in the playground.

These artworks were publicly displayed at an open day in Omokoroa last year – and the children coined the word `fantastical’ to reflect their vision.

Council’s Reserves and Facilities Projects and Asset Manager, Scott Parker says the playground is an exciting project that, when completed, will create a new recreation experience for all visitors to Omokoroa Domain.

"It is really important to create a playground that is reflective of all community voices and makes sure we have the social spaces to let people connect with their neighbourhood, their whanau and each other.

“The project team valued the input and great enthusiasm of the local school children and we did our best to reflect their ideas in the final concept design.”

The new playground will also see time called on two old family favourites – the tractor and lullaby swing. The two nostalgic pieces of equipment attracted considerable community sentiment through the public consultation phase, with concern about their proposed removal and replacement.

However, due to safety concerns, solutions to replace the lullaby with a modern equivalent and retire the tractor and return it to its original owner have been discussed with the Omokoroa Community Board, who support the final concept design.

Scott says while the price tag of the playground project is high in comparison to other playgrounds across the District, it is not just about replacing playground equipment.

“Given its location, it is actually about rejuvenating the main entrance into the Domain as well as replacing the very tired old playground with a new fit-for-purpose destination play space, appropriate to the needs of a growing community.

“Omokoroa Domain is a recreation focal point for the Omokoroa community and visitors throughout the year and it justifies an appropriate level of investment.

“We’re also working with Pirirākau to ensure the cultural elements of the design is reflected in the build.”

The playground is part of the wider Omokoroa Domain Concept Plan which includes several other future upgrades in addition to the playground.

Construction of the playground is expected to start in March 2021 and be completed by June 2021. The upgrade cost of $1.04 million is funded through a mixture of existing asset renewal funding and capital works funding.

Doesn’t look more than a few bits of scaffold.

Just keep Mallard away from it!

Trevor Mallards children playground cost 540k and basically got a slide. So, 1 million? Might get nearly 2 slides. Seriously though, they better make it a decent playground, this council can’t do anything right these days.

Let’s spend taxpayers money like it’s going out of fashion!! Council are clearly oblivious to the fact that ratepayers are struggling due to job losses and other impacts caused by COVID-19. I agree with The Caveman - this money could have been better spent elsewhere - given the climate we are all in. Let’s hope we’re not in a level 4 lock down come June 2021 when this is due to be completed, otherwise there are going to be a lot of disappointed kids when they are not allowed to use it!!!

of ratepayer money for a KIDS playground !!! What can I say - MONEY is NO OBJECT when its coming out of ratepayer pockets. I am sure that $1.04 MILLION can be far better spent !!

Playground for All Children

Omokoroa are so lucky. TCC erected one in Yatton Park but it’s only good for really young chikdren. I know many children would love a decent playground. Such a shame as there are also many visitors and many families having picnics & barbecues in the Park. Come on Tga City Council... give all the kids a playground..