Call for Tauranga Councillors to be sacked 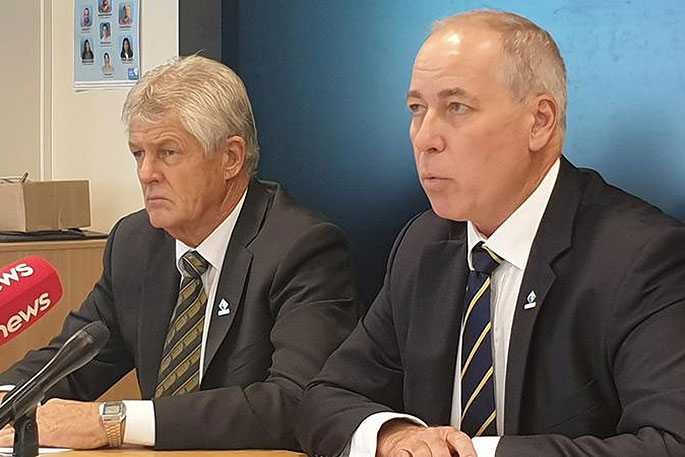 A Tauranga ratepayers association wants all of the local council's elected members to be sacked and fresh elections to be held.

This follows the Tauranga City Council approving a budget of up to $350,000 to fund an independent team tasked with sorting out in-fighting among elected members.

But the city's mayor says formal decision-making by the council has not been a concern and he believes elected members can sort out their differences.

The council narrowly avoided a Department of Internal Affairs intervention by agreeing to sort its own problems.

The solution elected members voted in favour of was an independent review and observer team, along with a budget of up to $350,000.

The council also chose to have an 'off-ramp' option, where it could end the process four to six weeks in.

"What really springs to mind is the phrase 'a leopard never changes it's spots', so we consider this will probably be a bad investment."

Brown believes the council should resign and a re-election be held.

But councillor Kelvin Clout - who was a victim of name calling - says replacing the council would be too much of a radical move.

He says the issues should have been tackled head-on months ago.

"We should have, as competent adults, been able sort out these issues amongst ourselves without the need of this very expensive review and observer team."

He believes the review and observer team will help facilitate discussions among council members.

"Once we get ourselves together and communicate with each other, [and] get issues on the table then we should be able to sort them out in due course."

Councillor Steve Morris says councillors should bear the financial burden instead of it being tossed onto ratepayers.

He says there has been little interaction between mayor and councillors since the decision to appoint an observer and review team.

"There's no demonstrable improvement in the interpersonal space, because people are avoiding each other and just trying to confine their interaction to the professional space."

Steve says the departure of "certain elected" members would pave the path of peace, but he did not want to name names.

Councillor Heidi Hughes believes stress and strong personalities have contributed to the disputes.

"We had four people who wanted to be mayor who then were elected onto council. There's sort of quite strong personalities and they have all still really wanted to be mayor, so that hasn't been easy," she says.

Mayor Tenby Powell declined a recorded interview, but in a written statement he says he did not think it would be appropriate for the council to be replaced and that's not the action being sought by the government.

"The Department of Internal affairs has asked to see a proactive approach to dealing with our interpersonal relationships, which will restore confidence that the council can function as a high-performing local authority. We have every ability to do this if a collective will to do so exists among councillors," he says.

"Having initiated that process, it's now incumbent on all elected members to see it through and commit to representing the community in a positive and professional manner.

"In fact, our relationships in formal decision-making situations are not what has caused concern. While there has not always been wholehearted agreement on all issues, and nor should there be, we have worked well on any number of crucial issues for the city and made many key decisions where the previous council failed to do so - the 2021 annual plan and budget being one example and which was hailed by one long serving councillor as the best process in which he has been involved.

"My hope is that the discord behind the scenes is now behind us. As mayor, I am committed to continue the leadership I have given to the city and to working positively and collaboratively with anyone who is looking to make good decisions on behalf of the city."

and ill have them sorted within a week

...all councillors will be ’treading on eggshells’ each time a voice is raised or a disagreement is followed by ’robust’ discussion for fear of being told to go to the naughty corner by one of the watchers in the room. All rather childish, amateurish and unbecoming of a council with genuine interest in our City advancement. As honest as it was, what has been said cannot be undone and it will simply not be possible to function openly and honestly for all ratepayers to benefit. Yes I agree with some writers this council needs to be removed and over time replaced with a group who at least respect their intended standing in the community, this in turn will be returned in kind by the public. Right now, it simply isn’t going to happen.......

It would be much easier for TCC to function if Andrew Hollis stopped baiting the Mayor.

For the Mayor to be sending texts with this language I would suggest the clean up needs to start at the top. Sounds like bully boy tactics to me. It is my understanding that some people are being intimidated and bullied in this environment. I would like to know why Larry Baldock decided to change his mind and vote for the Council taking over the rubbish collection. Was this a result of being bullied? I also understand that they also have someone in mind to take rubbish contract over. This being the case the first year would be at reasonable rates and then the prices hiked up. Some serious investigation needs to take place on this issue too.

they have all to go, and start again, they are all like a lot kindergarton kids, they are not fit to run Tauranga, and we do not want a foul mouthed ex army officer either. we are the laughing stock of nz.

This Council’s performance/behaviour appears to have grown worse since Tenby Powell was elected Mayor. Immature, egotistical wannabees running the city need to go!

Mayor Powell recently reported as saying he considered sending his wife and children "HOME TO AUCKLAND" which just proves he does not consider Tauranga home , but just a temporary place to make a name for himself and take the money. So I say "GO HOME" Mr Mayor, you are far to disconnected and insincere, we don’t need your ilk here!

So Kevin Clout you used the term "competent adults " oh that were true or believed by ratepayers. Of course you will spend $350,000 for a babysitter as the option of a new election is like turkeys voting for Christmas. We are heavily indebted , high rate city with growth pain. Infrastructure lagging behind like Auckland we will run short of water our rubbish collection is poor and will cost us more soon, our traffic and roads are suffering from huge growth and tinkering making things worse not better. Sadly the reality is a new election won’t stop the current council of wanna be mayors jockeying for votes and we will end up much the same, no answers for growth without enough money to invest except hapless ratepayers increasing rates as Tenby says so shoot the messenger ? ! great

with Kelvin Clout. Replacing council would be far less radical than what’s happened to date. Highlighted by Steve Morris’ comment "there has been little interaction between mayor and councillors since the decision to appoint an observer and review team." And Powell: "..I am committed to continue the leadership I have given to the city and to working positively and collaboratively with anyone who is looking to make good decisions on behalf of the city." So, he’s going to continue to lead in his style???

PAP Ratepayers/Philip Brown, a fresh election with ratepayers eyes now wide open would be a sensible choice. And no, we should not foot the bill for overseeing. Steve Morris, you’re right!

"As mayor, I am committed to continue the leadership I have given to the city ..." That’s good enough for me. Go NOW! There is no possible justification for Ratepayers to have to pay $350,000 so a bunch of squabbling wannabes can cling desperately to their gravy train. This group of posturing, self-promoting, no-hopers should have no place in governing our city; we don’t deserve them and they have demonstrated that their self-interests are far above any intention to serve the community. The ONLY way they could salvage any shred of decency and dignity would be to resign now, thus opening the way for a complete new election, as the Ratepayers Association has suggested. Hopefully, the next generation of Councilors will have observed that, unless you know how to behave and genuinely desire to serve the city, there is no point in applying.

And so say all of us

They are clearly ignoring calls to resign. Or pay for their own babysitters, rather than shoving it onto us. They dismiss the sizeable dissent as white noise. Their arrogance and egos are unbelievable. Maybe a bar brawl is all the Toy Soldier understands?

NO ratepayer money spent whatever in ’sorting this’. What needs to happen is for ALL parties to DO the job they’re being paid to do and grow the ....up!!! Throw your massive egos out the window and DO your job!! Start by making Steve Morris Mayor, the only one making any sense. Angry!!