Taonga returns to a Rotorua museum 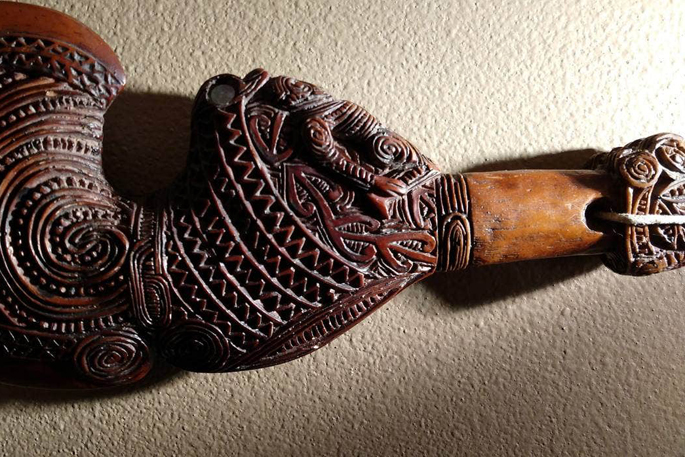 This Wahaika, carved in the Te Arawa region sometime in the 1880s, is set to return to New Zealand after decades hanging on a wall in a family home in Denver, United States. Photo: SUPPLIED/WAIKATO TIMES.

A car breakdown in a small rural US town called Twisp more than two decades ago was the unlikely catalyst for the return to New Zealand of an almost 150-year-old taonga.

It’s a story that starts in a “small, dusty somewhat junky antique shop” in the small town – population 958 – in Washington state.

Two decades ago, Sherri and Stephen Hunter wandered into the shop while waiting for their car to be fixed, and saw the wahaika – a traditional Māori hand weapon.

“My husband and I argue about which of us actually caught sight of it, but I believe the wahaika was with other miscellaneous decorative wood carved objects on a cluttered shelf,” Sherri says.

She believed it caught her attention first, as she had some experience as a wood carver and was also interested in cultural objects.

Her husband, an art reviewer and historian, “immediately judged the piece as quite old and exotic”.

Sherri could not remember how much they paid for the wahaika, only that “we did not pay very much at all for it”.

The couple initially believed they had acquired a work made by an indigenous carver from the northwest of the United States, “largely because of the fact of its presence in rural Pacific Northwest Washington”.

“I certainly recognised the talent and aesthetic sophistication of its creator,” she said. “I also did not relate to it as a war club.”

That changed in 1993 after the couple travelled to New Zealand, visiting again in the late 1990s.

“At some point as I looked at it in Denver, where it hung on the wall of my dining room [and] it dawned on me that the carved motifs were highly reminiscent of Māori artefacts we had seen at the War Memorial Museum in Auckland and possibly at Rotorua,” she says.

The couple got in touch with the museum in 2001. Their photo of the wahaika landed on the desk of Dr Roger Neich​, the then curator of ethnology.

Roger believed it was carved by a man of Te Arawa tribe who lived near Rotorua, probably in about the 1880s.

He said earlier wahaika usually had plain, uncarved blades but theirs, carved all over, was in a later fashion starting around the 1880s.

Intriguingly too, Roger said he was familiar with the carving style.

“I recognise the work of this individual carver in other clubs and walking sticks, but have not put a name to him,” Roger said at the time.

Roger told the Hunters his ongoing research into linking known individual carvers with surviving works meant he hoped one day to be able to name the man who made their wahaika.

Roger died in 2010 and due to the Auckland lockdown, the museum has been unable to access his archive to ascertain if the carver was identified in the intervening years.

“I am still hopeful that I will be able to put a name to this carver one day,” Neich told the Hunters.

“Apart from my personal research interest, this is a very fine club that any museum would be pleased to hold and display.”

That museum was set to be Rotorua Museum, which was in talks with the Hunters about the wahaika’s repatriation.

Sherri says her and her husband are “beyond” the long trip back to New Zealand themselves, but “clearly now is the time to make an effort to rejoin this wahaika to its ancestral home”.

“For 22 years we have so enjoyed this piece and have honoured it with care and prominence in our home,” she says.

“Though I have no idea where this wahaika has been in the previous years before it found me, I do believe that everyone who kept it gave it similar respect, because it remains in very good condition.

“Let’s try to continue to preserve it, so that generations to come may know if their legacy, learn, be grateful and take pride in it.”