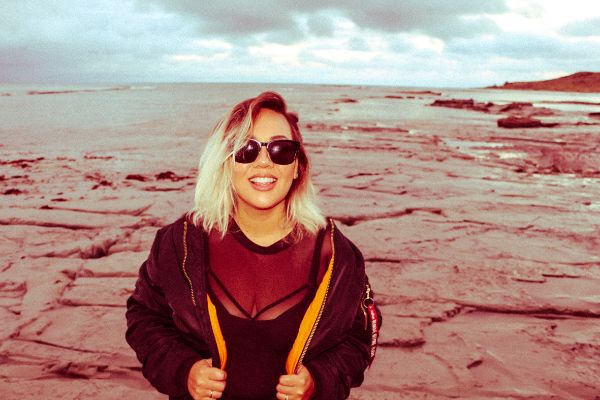 Covid-19 has been “a disaster and a blessing” for award winning singer-songwriter Kirsten Te Rito.

“I've lost all of my overseas tours, I usually do a few a year with different bands and obviously they're all cancelled,” says Kirsten.

“But it has allowed me time and space to be more creative with my original music.”

Kirsten and her husband James Illingworth, a pianist and composer, live in Wellington.

When a planned overseas trip was cancelled in March, Kirsten and her husband James Illingworth, a pianist and composer, decided to stay at a family bach in Māhia, in Hawke’s Bay.

“We took all of our music gear to write and record for a few weeks and got stuck there for lockdown.”

The two musicians remained in Māhia for three months during the various alert levels.

“We tried to make the most of it, use our time wisely and come up with some interesting ideas, and I think we achieved that.”

Later on, the couple was awarded funding from Creative New Zealand to make a new concept album, inspired by their lockdown experience.

The album will feature “nature sound samples” Kirsten and James recorded during their time in Māhia.

“Most days we would head down to the beach for our daily walk and it was so quiet there, we hardly saw another soul.

“We came up with the idea to record nature sounds on our walks to use in our music.”

They found a hollow log and spent an hour hitting it with different sticks and stones to create “interesting drum sounds”.

“Banging on some dry toetoe became a percussion instrument and the ocean became white noise which we can manipulate inside our computer software.”

The two are now working hard to get the concept album finished.

Kirsten has won multiple titles at the National Waiata Māori Music Awards, which this year will be held at Toitoi, Hawke’s Bay Arts and Events Centre on October 2.

Winning the award titles helped gain recognition for her mahi.

“It definitely gives you a little extra pep in your step and it helps you to keep up that drive to succeed.”

Nominations for this year’s awards closed at the end of August but Kirsten encouraged artists to think about submitting work for next year’s event and beyond.

“Whether you're a finalist or you take home the prize, it's good to be able to share those milestones with people who might be programming festivals or radio shows, for example.

“And it's a huge pat on the back for you and your team for all the hard work and hours that go into crafting your music.”

“It's lovely to have that one special night every year when we celebrate the success of Māori artists and their music, and a lot of heart and soul goes into putting these awards together.

“It's an exciting event to be a part of and it's always a great way to get in amongst it and meet other Māori artists that you haven't had the opportunity to meet before.”

Kirsten said it was “an honour” for music artists to be recognised for their work at the awards event.

“It's not always an easy ride being an artist so this is a super special night to just sit back and celebrate each other and the mahi we do.”

Kirsten, Ngāti Kahungunu and Rongomaiwahine, sings, performs and records in English and Māori.

Her new EP, Te Kaitiaki, is also a te reo project and was released in May 2020, made with support from Te Māngai Pāho. Kirsten is working with some “talented creatives” on videos for two tracks from the EP.

“My advice for Māori artists starting out in their careers is to be your authentic self.

“Tell your own story through your music, remember you are unique and that's what makes you special and interesting to your audience.

“Also, I think it's really important to know your craft and always keep pushing yourself and learning.”

Finalists for this year’s National Waiata Maori Music Awards will be announced on September 17 and the winners will be revealed on October 2.

The National Waiata Māori Music Awards seeks to develop, encourage and honour the achievements of outstanding traditional and contemporary musical compositions and performances annually. This is the most prestigious music awards event to acknowledge our Māori composers.