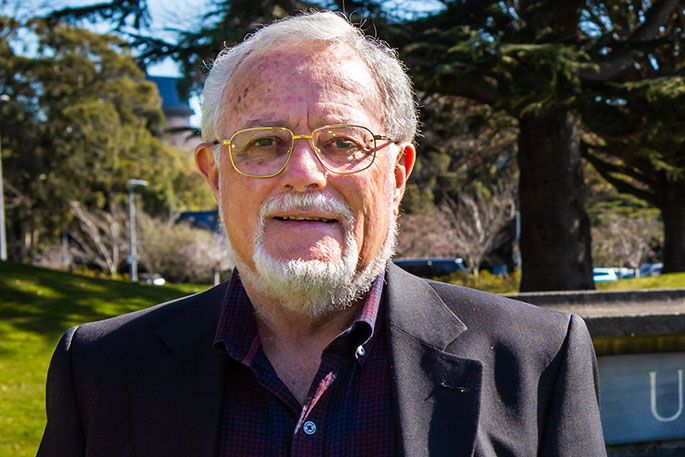 A drive to improve family life has underpinned most of Neville Blampied’s 50-year career in Psychology at the University of Canterbury.

The internationally recognised expert in applied behaviour analysis, retiring at age 74, has just been awarded the title Emeritus Professor.

He will continue to be involved with ongoing UC research, including the renowned Good Nights Canterbury Autism and Sleep Project and the work of the Mental Health and Nutrition Laboratory.

Emeritus Professor Blampied believes a legacy he will leave is helping Family Psychology, an undergraduate course he founded in the late 1980s, become a significant focus of study.

“I’m interested in investigating how we can improve family life and the relationship between parents and their children,” he says.

“My interest in families fed into my interest in ‘How do we get people off on the right foot towards wellbeing?’ I believe the three wellsprings of human wellbeing are sleep, nutrition and exercise. All these have their foundation in family life.”

He has been involved in many influential research projects at UC, particularly on infant sleep in typically developing children and the treatment of sleep problems in children with Autism Spectrum Disorder, behavioural family therapy, and exploring the links between nutrition and mental health.

Most of this research has been in collaboration with postgraduate students, and he has supervised well over 100 masters and PhD students.

He’s proud the goal of this work has been to improve people’s everyday lives and benefit the community.

“For that reason, I don’t feel I should apologise for having enjoyed the privileges of academic life, and I recognise that I have been very fortunate to have worked for a very supportive organisation. I think the University of Canterbury is an institution that really does take intellectual life seriously.”

Head of UC’s School of Psychology, Professor Don Hine describes Emeritus Professor Blampied as a highly valued colleague. “Staff and students describe him as professional, articulate, collegial, cerebral and extremely generous. He has been a friend, confidant and mentor to many, and his sustained and substantial contributions have played an integral role in Psychology’s successes at the University of Canterbury.”

A Fellow of the New Zealand Psychological Society since 1995, Emeritus Professor Blampied received the Adcock Award from the Society in 2008 for his record of research.

He was the first New Zealander to be elected a Division President of the International Association for Applied Psychology, the oldest international organisation in the field of Psychology.

He was the Head of UC’s Psychology department from 2005 to 2012, including an “incredibly challenging” period following the Canterbury earthquakes and served as National President of the Association of University Staff (now the Tertiary Education Union).

Retirement isn’t a life stage that worries him. “One of the lessons I guess my life has taught me is that there’s not a lot of point in doing a lot of preparatory angsting about new roles.”

He is a huge fan of Christchurch as a place to live and fell in love with Canterbury and the South Island after moving from Auckland in the 1970s. He has plans for more cycling and tramping in retirement.

“It will be different from what I anticipate and there won’t, for a while anyway, be the international travel that I was hoping for. I still hope to continue working and collaborating and doing student supervision. You’ve got to keep active, intellectually as well as physically.”