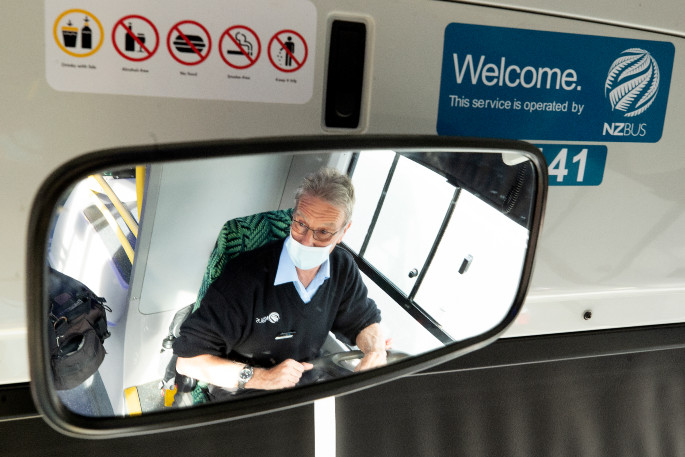 Masks are now mandatory on public transport nationwide. Photo: John Borren
Former Cooks Islands Prime Minister Joe Williams has died after contracting Covid-19, the second death connected to the Auckland cluster. The first was a man in his 50s, who had been in Middlemore Hospital’s intensive care unit.
Despite the deaths, testing stations in south Auckland were near empty on Saturday, prompting community leaders to call on people to get tested.
There were three new cases of Covid-19 on Saturday, two epidemiologically linked to the Auckland cluster, and one in a managed isolation facility.
Aucklanders headed out in force over the weekend, the first since lockdown restrictions eased, with some bars having to turn patrons away because of the 100-person limit.
Despite the recent cluster, New Zealand is still one of the safest countries to be in during the Covid-19 pandemic. A report from Forbes ranked New Zealand as the second safest out of 250 countries, following Germany. South Korea was third, followed by Switzerland and Japan.
Global toll
The global number of confirmed Covid-19 cases was 26.7 million this morning according to data from Johns Hopkins University.
It put the number of deaths attributed to the disease worldwide at 876,400, up 5452 from the day before.
The United States leads the global tally, with about 6.23m confirmed cases and 188,252 deaths attributed to the disease.
Brazil was next on the list, having passed 4m confirmed cases and with 125,502 deaths. India had the third highest numbers with more than 4m cases and 69,561 deaths.
What should I do?
Auckland has moved to alert level 2.5, and the rest of the country is at alert level 2.The geographic boundary of the Auckland alert level is the super city.
In Auckland, there is a ten-person limit on social gatherings, apart from funerals and tangihanga, which have a 50-person limit. Public and event venues can have up to 100 people.
For the rest of the country, gatherings are restricted to 100 people.
Masks are now mandatory on public transport nationwide.
If you are sick, call your GP before you visit, or call Healthline on 0800 358 5453.
To avoid contracting and spreading the virus, wash your hands properly, cough and sneeze into the crook of your elbow and throw tissues away immediately.
More on SunLive...
0 Comments
You must be logged in to make a comment. Login Now
There are no comments on this article.