Another survivor rescued from missing freighter 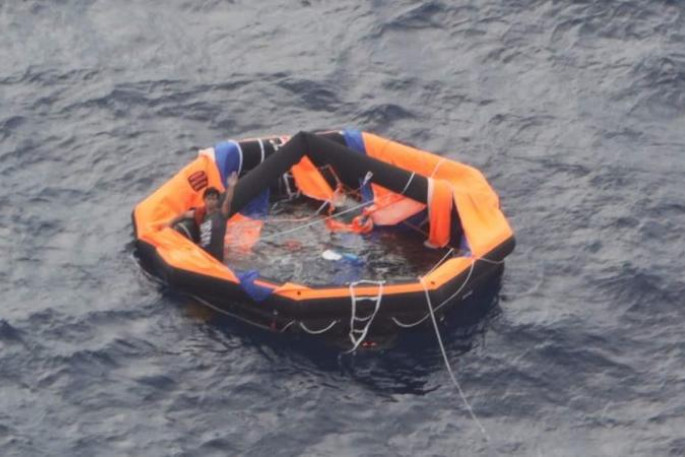 The life raft in which a 30-year-old Filipino was found by the Japanese Coast Guard. Photo: Japan Coast Guard.

Japanese rescue crews have found another survivor from a live export ship that sank off the country's south-west on Wednesday.

Authorities found the sailor, a 30-year-old Filipino, on a life raft. He was conscious and able to walk by himself.

The Japanese Coast Guard said a local government office made an emergency call at about 3pm local time, saying it could see an "orange-coloured boat on the sea".

The Coast Guard diverted one of its search aircraft to the area and located the man who was wearing a life jacket.

A patrol ship rescued him an hour later before the search for 40 other missing sailors was later suspended, with the powerful Typhoon Haishen heading towards the search area.

Earlier in the day, a coast guard crew found the body of another sailor who was pronounced dead. His identity is not known.

The Gulf Livestock One left the port of Napier last month with 43 crew on board, including two New Zealanders, and almost 6000 cattle - bound for China.

The vessel also had two Australians and 39 Filipinos on board when it issued a distress call early on Wednesday.

So far two Filipino crew have been rescued and are being treated by authorities, but 40 crew remain missing - including the two New Zealanders and the two Australians.

Video of the rescue shows Sareno, wearing a singlet and shorts, being helped aboard a coast guard vessel in wild weather conditions.

He said the vessel was then hit by a huge wave, causing it to capsize.

The Panamanian-registered, 11,947-ton ship sent a distress call from the west of Amami Oshima island in south-west Japan as Typhoon Maysak lashed the area with strong winds and heavy seas.

It was carrying 5867 live cattle on its way to China, and the cause of the distress call was not immediately known.

On Friday morning, rescuers saw dozens of dead cattle floating in the sea, and a lifejacket with the name "Gulf Livestock" on it.

Authorities also found oil floating on the sea 150 kilometres north-west of the island of Amami Oshima.

The search is expected to resume after Typhoon Haishen passes through the area.

New Zealand officials said Friday they were temporarily suspending any new approvals for the export of live cows following the incident. The Ministry for Primary Industries said in a statement it “wants to understand what happened on the sailing of the Gulf Livestock 1.”