A short cut to the shops 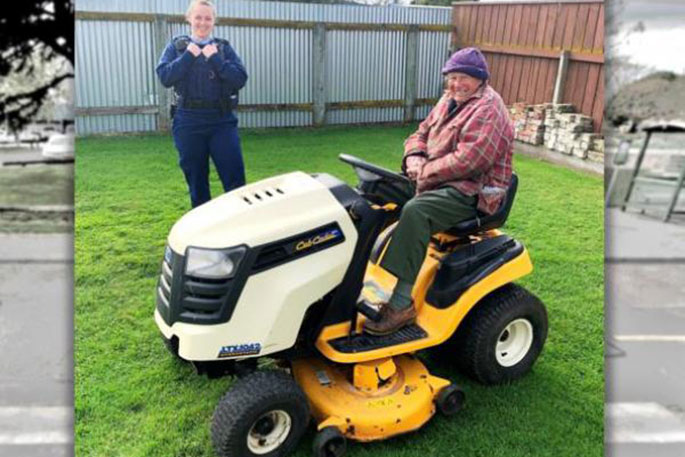 A community constable has come to the rescue of an 87-year-old man found driving his ride-on lawnmower to the supermarket.

Constable Sophia Holloway came across a very independent Ray Jane heading into Napier city from the suburb of Maraenui and managed to convince him that it wasn’t the best mode of transport into the city.

She followed him home to ensure he got back safely and during their discussions, Sophia discovered that Ray’s car had been stolen a day or two before and he had no other form of transport.

Sophia took him back into town to get his groceries, then to the police station to report his car stolen and rang his insurance company to lodge the claim as he doesn’t have a phone or internet.

On the way back home they dropped in on Ray’s brother, but he wasn’t home so she dropped Ray back to his house.

Sophia also referred Ray to Age Concern in the hope they can assist with transport.

Sophia’s work colleague Constable Andrew Chantrey says he’s had regular contact with Ray since Sophia made him aware of the situation and says Ray is extremely grateful to her for her help that day - and the empathy and compassion she showed.

Andrew continues to work with Ray, in conjunction with Age Concern.

i can see the police reasoning. not really safe on the road, perhaps go on the footpath like the cyclists do and the mobility scooters. no harm in that

Community Policing at its finest. What a great story and what great cops. The force can be truly proud of you. Thank you for your awesome service to your community. Thank too Sunlive for a great article.