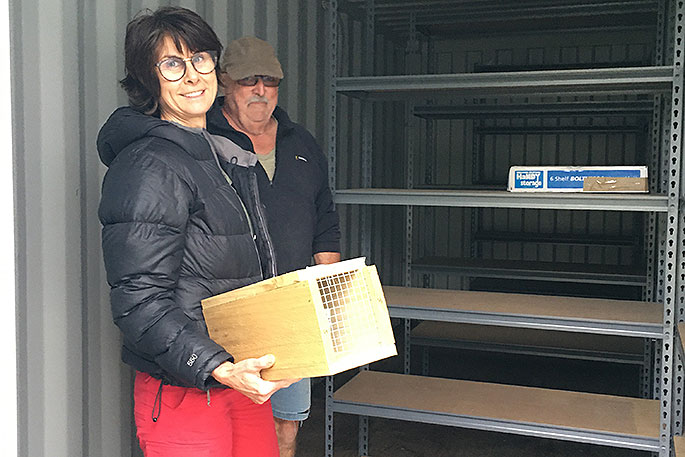 The trap was set for Debra Jager two years ago while listening to a Radio NZ interview with Alison Evans called “Let’s get trapping”.

Since then, Debra has been caught up with the national goal of New Zealand being Predator Free by 2050 and she is doing her bit by setting up a pest trap library in Whakamarama with the help of Department of Conservation’s Community Fund.

The trap library will loan locals the right type of predator control device to remove problematic pests like rats, hedgehogs, possums and stoats.

The aim is to remove mammalian pests so the birds, trees and wildlife come back to the Whakamarama area.

“When I first heard the interview about pest trap libraries, I thought it was a great idea and that we should have one in Whakamarama,” says Debra.

“During our conversation Bob expressed his vision to get traps on lifestyle blocks and commercial properties in Whakamarama to increase predator control in the area and supplement the trapping already being done by The Friends of the Blade group.

To get the library off the ground, funding was needed. WCI applied for funding from DOC Community Fund and was successful in getting a grant for $10,400 over two years.

The DOC Community Fund contribution will be used to purchase a shipping container to house the library, predator control traps and for administrative costs.

The urban backyard trapping program Predator Free BOP have also come onboard with a donation of 10 rat traps to the library along with the offer of one free rat trap to property owners in the area.

The community initiative will be located centrally next to the Whakamarama Community Hall and is available to Whakamarama locals.

“It’s a community affair with locals helping get the site ready and the Katikati Men’s Shed will be making the trap boxes for the library,” says Debra.

How the pest trap library will work:

Communities nearby have already heard rumours about the Whakamarama trap library and have been getting in touch with Debra to learn the ropes of how they can set up their own.

This is the power of communities working together and helping each other out, so watch out pests – your time in Whakamarama and New Zealand are numbered.