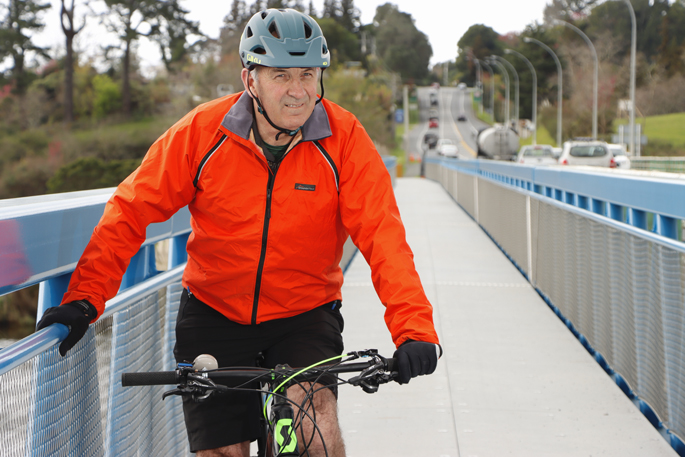 Wairoa bridge cycleway AE 2033 Caption: John Ward is concerned for the safety of cyclists once the reach the end of the Wairoa Bridge cycleway. Image: Daniel Hines/SunLive.

Whanganui National Park has its Bridge to Nowhere but one cyclist reckons Tauranga now has one to call its own.

The Wairoa River Bridge Cycleway is complete and well-loved but that story ends at the Bethlehem end.

John Ward jokes it is the “bridge to nowhere”.

He lives near Wairoa Road and wants to know when the Bethlehem section will be complete because he says it is unsafe riding next to a busy highway.

“Cyclists they go off the bridge and then there’s nowhere really, apart from along the side of the main highway.

“If you were riding up there and there was a family coming the other way it wouldn’t be very nice crossing paths if there was a bloody great logging truck or something going past at the same time.

“You don't want children or groups of people exposed to the dangers of riding next to a state highway.

“I've ridden down from Bethlehem towards the traffic a few times when there's been big trucks and it's a bit scary.”

John has ridden the cycle track from Wairoa out to Omokoroa and says it is a really cool ride that is being well utilised by the community.

“It's a fantastic facility, but it sort of comes to an end at that point and nothing's happening.”

The Omokoroa to Tauranga Cycle Trail is a 19km route made up of both new and existing off-road shared paths and local road connections.

Western Bay of Plenty District Council is the lead agency on the joint $13.02 million project and there is no timeline for when the section linking the bridge to Carmichael Road in Bethlehem will start or finish.

WBOPDC infrastructure services group manager Gary Allis says the Omokoroa to Tauranga Cycleway is open for use between Omokoroa and the northern end of the SH2 Wairoa River Bridge.

He says council has opened the cycle section of the bridge to provide a safe alternative for road cyclists who regularly cycle along SH2.

“For safety reasons, the extension will not form part of the official Omokoroa to Tauranga Cycleway until the final section is in place.”

Instead, people wanting to use the trail from Tauranga are encouraged to park at the Wairoa River Road carpark and cycle to Omokoroa from there.

The safety side of it is pretty concerning, but also the fact that the WBOPDC would go ahead and spend over $5million on the bridge before formalising a plan for completion of the track is crazy.

I find it concerning that there is no crash barrier on the Katikati side of the bridge. So many crash barriers between Tauranga and Katikati have barriers in ridiculous places yet there is no barrier to protect bike riders or the road directly below. Cars often pull out in front of traffic from Wairoa Rd, it is only a matter of time before there is a major accident. Also finish the cycle way on each side of bridge.

I came over the bridge toward Bethlehem and two cyclists were coming down the hill, toward traffic. They were in the hard shoulder but only just. Not particularly visible. If a vehicle, and they are travelling at 90kph there, had just gone left a little towards the shoulder, the cyclists would have been flattened. Madness.

Is the bridge-to-nowhere annoying joyriders or a few serious commuting cyclists ? It is after all free-choice by cyclists if they want to mix it with 80km/h+ traffic. I tried cycling the main road fog-line once, never again. Far too dangerous.

Actually, is the bridge officially open? There are barriers at each end which cyclists keep moving so they can get on to the bridge.

About says it all

" Instead, people wanting to use the trail from Tauranga are encouraged to park at the Wairoa River Road carpark and cycle to Omokoroa from there. " Another typical council HALF job !!

The road is on the five year plan for completion of the northern link so guess it’s wait and see as all the road users also wait and no doubt a lot of disruption and angst to come. So I expect some difficult times ahead and unlikely I will see the fruition . Cyclists are a minor concern in the big picture of traffic and cycling is still and will be risky on some roads it just goes with the territory until they get seperation from vehicles which is numerically expensive .