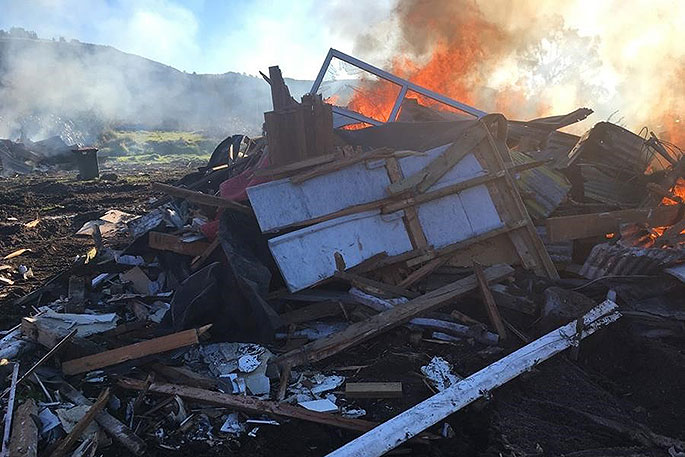 A Tauranga man has been prosecuted for burning demolition waste at a residential subdivision site in Rotorua in June 2018.

Kevin John Davies pleaded guilty and was sentenced to $14,000 in penalties, including a fine of $9,000 and $5,000 reparation he must pay to affected neighbours.

The offending involved two separate fires, with the second occurring after a Bay of Plenty Regional Council compliance officer had already been on site earlier on the same day in response to a complaint about the fire.

The fires were lit to dispose waste material from two demolished houses at the site and contained plastics, carpet, insulation and some asbestos. The burning of these materials is prohibited.

In addition to the environmental impacts, burning prohibited materials can have an impact on human health, as highlighted in this case by the orders that Davies is to pay reparation to affected neighbours.

In his sentencing decision, Judge J A Smith said he was “baffled” as to why Davies, a former senior firefighter, decided to burn the demolition materials rather than taking it to a landfill, and noted that doing so had not saved costs.

Judge Smith stated this case should act as a deterrent to others who think that fire is a simple way of getting rid of materials they do not want.

This burning occurred in the Rotorua urban area, a polluted airshed, with a history of air quality issues, which the Regional Council and the community have invested in and worked hard to try and improve.

Cleaner air makes a difference to the health of the community – especially the young, the elderly and those with respiratory illnesses.

Children are the most vulnerable as they breathe more rapidly than adults and so absorb more pollutants.

On average, a person inhales around 14,000 litres of air every day. When the air we breathe is contaminated, it affects our health.

Judge Smith highlighted these wider consequences for the Rotorua community, “this is one of the worst airsheds in New Zealand and the discharge of these toxins into the air in Rotorua is a serious matter.”

“This is inexcusable and undermines the community’s efforts to clean up Rotorua’s air," says Regional Council’s Compliance Manager, Alex Miller.

Burning waste to cut costs means the environment and human health ultimately pays the price and this prosecution demonstrates that isn’t acceptable.”

Open burning within 100 metres of a neighbouring dwelling is not allowed in urban and rural areas in the Bay of Plenty.

The sentencing decision can be viewed online.