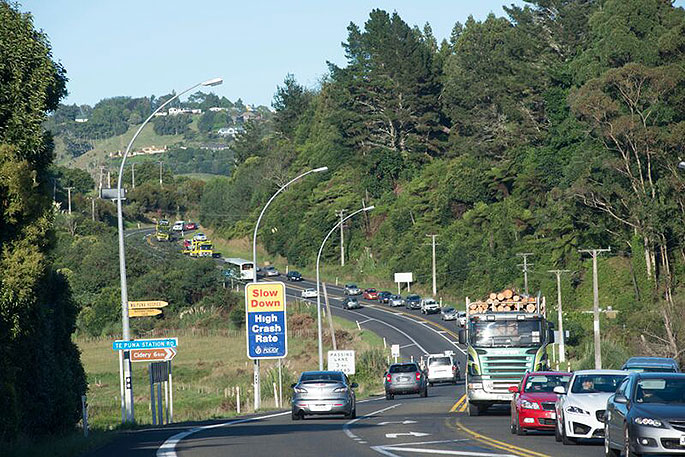 Heavy traffic volumes on State Highway 2 is one of the reasons people have been campaigning to “Fix the Bloody Road”. File image/SunLive.

The winding stretch of State Highway 2 between Tauranga and Katikati has claimed 28 lives and left 335 injured in the past 11 years.

Statistics released by New Zealand Transport Agency reveal there have been 539 reported accidents on the highway since 2009 and most are attributed to driver error.

Poor observation is the leading factor in crashes with it recorded in 35 per cent of all crashes.

Only 11 per cent of all crashes were attributed as “road factors”.

Calls to upgrade the road have been prevalent for years and, with construction about to begin on a 6.8km, four-lane corridor between SH29 and SH2, some improvement is being achieved.

The upgrade, dubbed the Tauranga Northern Link, will have a separate walking and cycling path along the entire length, including across the new Wairoa River Bridge and will be completed in 2025.

National Party MP Todd Muller says the TNL could have been built in 2022 had plans not been changed.

“It [a similar upgrade] was already budgeted for,” he says. “They cancelled it.”

Muller, who grew up in Te Puna adjacent the highway, is frustrated safety upgrades have been left so long.

He says the TNL is a good start but the entire road between Tauranga and Katikati needs to be upgraded into a four-lane highway to save lives.

He says drivers become frustrated at the traffic on this narrow stretch of highway and make “less than ideal passing manoeuvres”.

However, he says, poor driver behaviour should not be used as an excuse to stop safer roads.

“If that was the case we’ll never upgrade roads.

“We’ve built goat track roads, and they are dangerous we have to upgrade them to make them safer. If the roads were safer we would have less carnage.”

Muller says National had aimed to make the road project one of their Roads of National Significance.

Western Bay of Plenty Area Road Policing Manager Senior Sergeant Rob Glencross says the main contributing factor to serious crashes are the same in all parts of the country.

“These are people not wearing seatbelts, people driving impaired or distracted, and drivers speeding or going too fast for the conditions.

They will never stop!!

The Police will never stop focusing on speeding motorists. I’ve looked at the statistics on the NZ Police site and in 2019 the Police racked in a staggering $115,331,700 in fines!! This coupled with the fact that speed is a lesser factor in causing accidents proves one thing only........catching speeding motorists is a revenue generator only - nothing to do with road safety. It’s also amazing how many Police have been caught for speeding - they account for $284,370 of the 2019 total. I haven’t worked out the percentage of Police speeding per Police population versus public percentage per NZ population minus the Police population yet.

...(in my opinion) build four lanes in both diections and still have serious incidents on a regualr basis. What does interest me is that NZTA have released ( as many thinking people knew) that ’speed’ is a relatively minor reason for the majority of the accidents, with driver error being the majority, and yet the Police still push out the same old ’slow down’ and ’speed kills’ etc..which is the cheap, easy and sadly most inneffective message. Generally nowadays, drivers don’t give two stuffs about correct rules and procedure, much probably like the way they live, so SH2 is a great reflection on how ’we’ currently live and think. Possibly enforcement (no, NOT speed cameras!) may help but it meeds to be done quickly and firmly before attitude change is not possible....

Poor driver behaviour is responsible for the majority of accidents in Tauranga. Most of them are single vehicle, and there is seldom another explanation for hitting trees, lampposts, fences, traffic light standards etc. Unless those objects jump out in front of drivers, it is hard to see how they can miss them. But many can’t see red lights, pedestrians crossings, school patrols or give way signs.

So the police should stop being so petty and focused on minor speeding, and instead focus on the main factors which are causing accidents.

Average road conditions should not be used as an excuse for dangerous drivers! Trees and lamp-posts are being crashed into on a weekly basis, that could easily be a person or parked car with someone in it... Why is this happening so frequently? It shouldn’t be used to get votes. The way National talk about it, you’d think they were out on the shovels themselves... the best thing they are good at building is dead ends!

Quote: "Poor driver behaviour should not be used as an excuse to stop safer roads." WHAT ? Why not ? I’ve driven the road a few hundred times and it’s quite a neat road, well marked and maintained. If 89% of accidents are driver error, then there is the problem, it is not the road. It is the nut behind the wheel not spotting a tree over the road or one of the 11% problems short of being hit by a tree or a slip. So one prang in 10 can be ’claimed’ as road condition. Wink-wink. I suspect not.

We see it isn’t the road that’s responsible for the high number of accidents. As for speed being touted as a leading cause, the figures show it’s actually in fifth place! It’s about time we had campaigns to clamp down on mobile phone use, tailgating & general driver inattention. I wonder how many of the crashes involve those on learners licences, high time for a revamp of driver training.