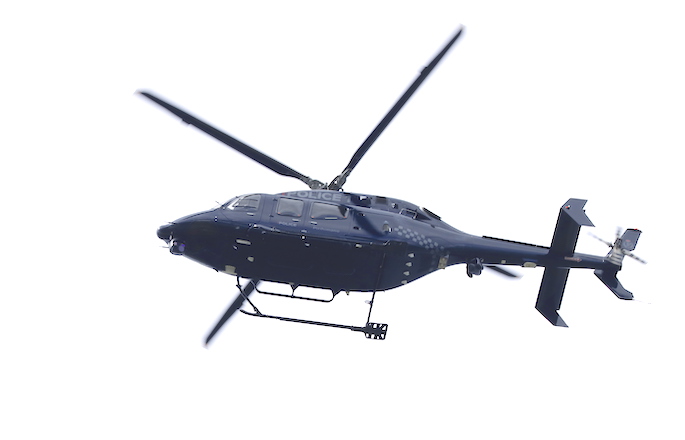 The Eagle helicopter was deployed from Auckland to assist and located the empty ute at a Kaingaroa Forest property. Photo: Supplied

Police are searching for the driver of a ute who rammed it into a speed camera vehicle and a police car near Karingaroa Forest this morning.

“At about 10.25am today a stationary Police mobile safe speed camera vehicle was allegedly deliberately rammed by a person driving a silver-coloured Ford Ranger ute on Daniel St in Kaingaroa Forest,” says a Police spokesperson.

The operator of the speed camera vehicle was not injured and immediately requested assistance.

The ute travelled towards Murupara where a police patrol vehicle attempted to pull the vehicle over.

“The ute stopped and then attempted to deliberately ram the patrol vehicle before decamping.

“A pursuit was initiated but was abandoned less than a minute later due to the manner of driving.

“The ute then attempted to ram the same patrol vehicle again as it drove away,” says a Police spokesperson.

The Eagle helicopter was deployed from Auckland to assist and located the empty vehicle at a Kaingaroa Forest property just before 12.30pm.

Police are continuing to make enquiries to identify and locate the person involved.

Police would like anyone who witnessed a silver-coloured Ford Ranger Ute in the vicinity of Kaingaroa Forest today to contact Police via 105 and quote event number P043468128.

Alternatively, anyone who would like to supply information anonymously can do so via Crimestoppers on 0800 555 111.

Police advise that further updates will be made when available.