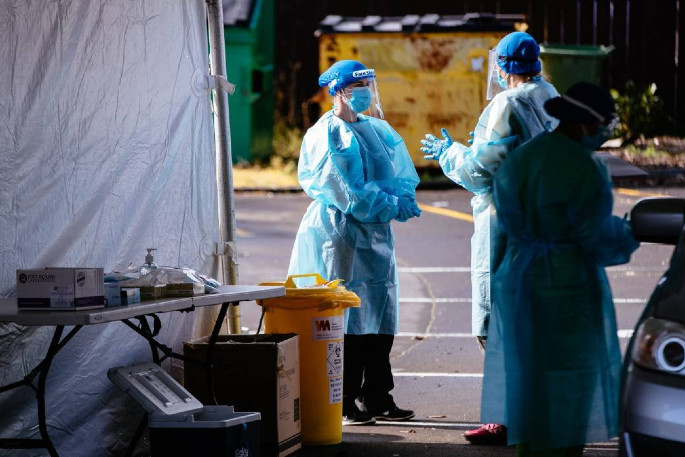 Thirteen more cases of coronavirus have been announced by the Ministry of Health on Saturday. Photo: Abigail Dougherty/Stuff

There are 13 more cases of coronavirus in New Zealand announced today.

There are 11 new cases of Covid-19 in the community, with Auckland due to drop to alert level two tomorrow night. There were also two new cases in managed isolation.

There was no media conference today. In a written statement, the Health Ministry said ten of the new community cases were clearly epidemiologically linked to the Auckland cluster.

The source of the community outbreak, first announced on August 11, remains a mystery.

It said six cases were linked to the Mt Roskill Evangelical Church, including four within the same household and two who attended church services.

Four other cases are contacts of previously reported confirmed cases.

The other person who has tested positive for the coronavirus is being interviewed today to discover any links to the cluster.

The two new imported cases in managed isolation both arrived in New Zealand from India on August 23. They are a woman in her 70s and a man in his 30s. They both tested positive around day three of their time at the Grand Millennium in Auckland.

There are 11 people with Covid-19 in hospital today - three in Auckland City, four in Middlemore, three in North Shore and one in Waikato.

Eight people are on a ward, and three are in ICU - one each in Middlemore, North Shore and Waikato Hospital.

The Ministry said 132 people linked to the community cluster have been transferred to the Auckland quarantine facility, including 82 people who have tested positive.

With seven more people recovering from the virus, the total number of active confirmed cases is now 136, as well as one previously reported probable case. Twenty of these cases are imported.

The total number of confirmed cases of Covid-19 in New Zealand is now 1376.

Auckland is set to move out of alert level three at midnight tomorrow.

There were 12 new cases reported yesterday - five in the community and seven imported cases.

Good ideas. Then we can get back on track. As you point out, well over 100 cases. No deaths, a small handful in hospital. And from a community that is known to have underlying health issues that this cold virus ‘likes’ to attack. Sweden had the right idea all along.

So on 12th August Alert L3 is initiated in Auckland due to 4 community transmissions and now with community transmission ramping up daily and over 100 active cases currently known of, (and know there’s more out there and more to come), with hospital admissions increasing, including ICU admissions it’s now time to move down to L2. How Mickey Duck is that . . . On that thinking why not just open the borders, drop to no alert level at all and tell people to just wear a handkerchief like a cowboy.