For the love of a Tauranga tree 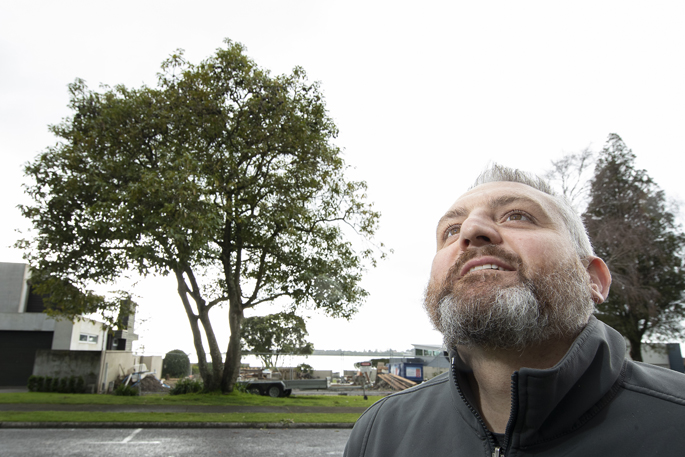 Tom Lehner lives across the road from the tree and wants it to stay. Photo: John Borren/SunLive.

It started as a simple request by Garry and Luanne Bettelheim, the owners of a property in 13th Ave, to remove a tree.

They are knocking down the existing house and replacing it with two, two-storey dwellings. Nothing strange about that. Intensification is being encouraged on Te Papa peninsula?

The stumbling block is a 40-year-old avocado tree, on the council berm right where the Bettelheims want to put the driveway. A tree with friends.

Under Tauranga City Council’s Vegetation and Tree Management Policy 2014, the tree doesn’t meet the criteria for removal. It won’t be considered for removal until there is sufficient feedback from the local community, says the council’s urban forrester Richie Goldstone in a letter to nearby residents.

The eight-month battle culminated on Tuesday with city councillors faced with 80 pages devoted to the tree in its meeting agenda.

Phil’s letter begins - “I stand trembling in the morning light, not from the stirring breeze but from the fear my life will be cut short by a chainsaw…”

After 90 minutes the council decided the tree’s life could indeed be cut short by a chainsaw.

However, the tree does serve as a reminder of democracy in action.

Tom Lehner and Christine Price live across the road from the avocado tree. They moved into the avenue a couple of months ago.

They had been warned by the previous owners that the tree may go.

“We were disappointed but it’s still a beautiful area. We thought we’d try our luck and fight to keep the tree. If you drive down 13th Ave, the whole area is a green corridor, so it’s really awesome. We moved here because of all the greenery,” Tom says.

After a tree visit and assessment, the Bettelheims were asked to re-consider their proposal and look at possible alternative designs.

Alas, one of the units had been pre-sold, so design modifications were off the table. After more head scratching, mulling and discussion, the owners were asked if they’d discussed their plans with the locals.

It was the height of COVID-19 lockdown.

A letter drop around the neighbourhood resulted in a flurry of emails to Tauranga City Council from concerned residents not wanting the tree to be removed.

Tom says the tree’s been a real feature of that end of the avenues.

“A lot of people come down here for the avos, you see them constantly and it’s full of birds all the time.”

“The owner wants to maximise his property. Unfortunately development has to happen,” says Tom.

During the process GRANRA dived into the fray, emailing elected members and the mayor, objecting to the removal. Meanwhile the architect emailed council requesting removal approval.

Letters went out to 133 residents in May. Twenty-nine responses were received, with 28 opposing the tree removal and one in support.

More meetings took place as alternatives were explored. Maybe a driveway ‘bridge’ over the roots instead of a traditional concrete driveway? Maybe smaller trees to replace it?

In July an email did the rounds suggesting a boycott page be set up “showcasing the people involved in this act of urban vandalism” with a request that the community avoid those developers, designers, contractors and sales people both commercially and socially.

“There’s constantly people down there picking avocadoes. Everyone benefits from it. Having an avocado tree that’s on public property and the avocadoes are free, it’s pretty awesome.”

Mary’s School is nearby, so bus bays and footpaths had to be considered. Three car parks are outside the proposed building development.

“Potentially one of those carparks is going to go, which is disappointing as well because from what I understand from the locals, it took them a long time to get additional car parking down the street. If you come down here at about two o’clock the street is packed with parents waiting to pick up their children so they’re always scrambling, putting their cars into other people’s driveways, so there aren’t enough carparks as it is.”

At Tuesday’s meeting, council voted for the tree’s removal after adding conditions around the housing project meeting requirements.

Perhaps an opinion that is afforded slim shady under an avo tree that will no longer stand .

Ironic. Over to you.

Expected a defence of your opinion my entertainment is replete. Vivienne is entitled to her opinion . Just like yours and mine its just an opinion. The subtlety of hearing an opinion and going in to criticism or attack escapes you ,most would smile and say nothing. A plant in the wrong place is weed just as an opinion maybe too . Lol

I was being kind. Vivienne was mocking those who say ‘chop it’ as though they are not aware of issues like deforestation and food supply. They are, but unlike blinkered extremists, they have balanced views and proportionate sense. They do not take something to the extreme and make ridiculous statements. Those that do should be ridiculed, by definition.

Vivienne should be able to express an opinion Slim Shady without an attempt on personal remarks designed to ridicule her and her opinion. It reflects poorly on you not her and the idea of freedom to express an her opinion. Play the ball not the person

it’s not about the trees, it’s all about the money

Thank you. You demonstrate the warped thinking of the left wing tree huggers beautifully. You think that avo trees in a suburban streets represents a sustainable food source and oxygen source for the billions on the planet and that makes it untouchable. Warped. Presumably you live up a tree as you are against housing development and concrete?

Just you wait, until you cant breath the clean air that nature provides free of charge. Oh, and don’t forget the fruit that tree provides, at no cost. Pity help all you who want the tree gone. Try eating concrete when the food source has been bled

Tell the interfering tree huggers to do one. This country is going down the tubes due to these types.

Council needs to have a good look at trees in Tauranga. This decision is as bad as the decision to let whoever in their right mind to plant Ginkho Trees under power lines in Fraser Street knowing that grow HUGE!!!

At last a TCC decision I can agree with. The extremist environmental communist lunatics are running this country into the ground. Their foolhardy vision of us all singing kumbaya around the campfire whilst munching on tofu and smelling of BO needs to stamped out. Well done TCC.

Well done Council,its a tree.....make the developer pay for 6 other trees somewhere else .A man has to be able to build a house without worrying about a bloody tree! common sense has prevailed.

I sympathize with the developers pure and simple. Trees are not forever and a nice to have but why shouldn’t someone rightfully develop there property. Nonsense arguments about free avos and one parking space . Good on sensible council decision