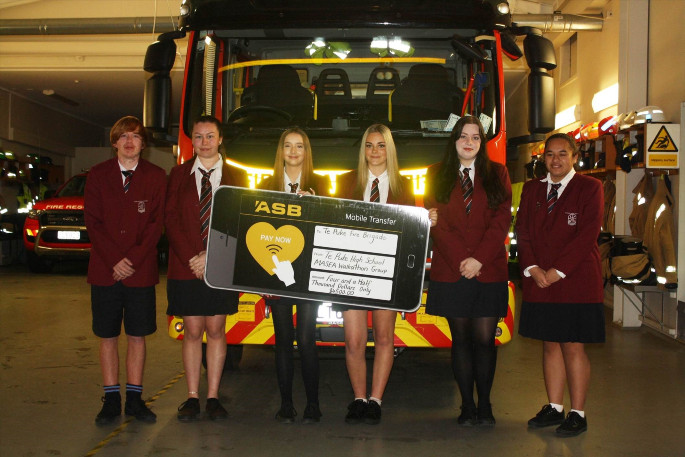 In 2009, the Te Puke Fire Brigade led a fundraising effort to raise $50,000 for Te Puke High School to help replace equipment not covered by insurance after a fire at the school.

The great relationship between school and brigade continues to be built, with students from Te Puke High School presenting to the brigade a $4500 cheque from fundraising efforts this year.

This event was organised by the students to raise money for the Te Puke Fire Brigade and their own Malaysian and Singaporean Educational Adventure -MASEA.

Representatives from the volunteer fire brigade joined the students walking in shifts over the 27 hour period, clocking up about 55 km each.

All of the students stayed overnight with their parents and caregivers on the main field at Te Puke High School for the duration of the 27 hours, supporting each other. Members of the Te Puke Fire Brigade, family and friends accompanied the students on their walk as they strode day and night through a 5km loop around the town.

“It was an incredibly successful fundraiser, with local businesses getting behind the students and the cause,” says a Te Puke High School spokesperson.

“Lily Rose Ludbrook, one of the students who walked during the fundraiser wanted to especially thank the Te Puke businesses who generously donated funds toward their MASEA trip and to the Te Puke Fire Brigade. She would also like to thank the parents and caregivers who gave their amazing support, along with the community who got involved over the 27 hour period.”

The high school says that with the advent of the lockdown restrictions of COVID-19 the overseas trip that the students were fundraising for had to be cancelled.

Peppa Brady, another student involved in the walkathon, spoke about the weekend back in March.

“Although I was disappointed the trip couldn’t go ahead, the experience was amazing,” says Peppa. “I got to meet students at school and form close relationships with them over the 27 hours of the walkathon.

“As much as the walk was challenging, knowing that we were raising money for the Fire Brigade kept us all motivated.” 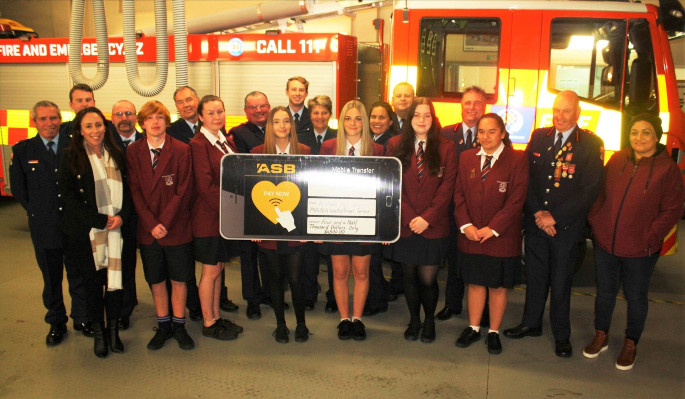 After Lockdown Level 4 and 3, on Wednesday August 12, just before the Te Puke Volunteer Fire Brigade’s AGM, six of the eight students went to the fire station to hand over the money they had raised.

“It was such a privilege to be able to represent Te Puke High School and give the cheque to the fire brigade,” says Haylee-Jayde Montgomery, one of the students present on the night.

“I felt honoured to speak on behalf of the walkathon group of students,” says Peppa. “I told the members of the fire brigade who were part of the walkathon how thankful we were for the support the students received up to and during the walkathon, and how pleased we were to be able to give the money to the brigade.”

Glenn Williams, the Chief Fire Officer of the Te Puke Fire Brigade, accepted the $4500 cheque on behalf of the brigade.

“The brigade’s share of the funds will be going towards our vintage fire truck project which will require a shed to house the new acquisition,” says Glenn.

“It seems a long time now since the walk but our members were absolutely thrilled to be invited to join them in their effort to raise the funds.”

Glenn remembered that the walk wasn't without incident.

“We got a callout at about 3am on the Sunday morning when the walkers at the time had just passed the fire station.”

Glenn says the brigade has had a great relationship with Te Puke High School, even more so since the big fire in 2009, when the brigade led a fundraising effort to raise $50,000 for the school to help replace equipment not covered by insurance.