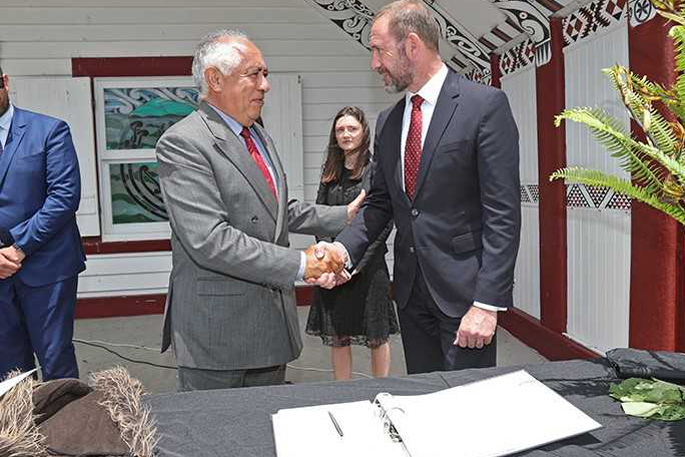 Ngāti Rangitihi iwi members have voted overwhelmingly in support of the Deed of Settlement to settle historical claims for breaches of Te Tiriti o Waitangi.

Te Mana o Ngāti Rangitihi Trust chairman Leith Comer says he is extremely pleased with the results and the way in which iwi members have recognised the importance of taking part in the four-week ratification process.

“After more than a decade, to be able to reach this critical milestone, is truly a special moment for all the descendants of Ngāti Rangitihi.

“On behalf of the trust, I extend my heartfelt thanks to all those who voted and played a part, including our iwi members, and our negotiators and trustees who have worked tirelessly for this settlement.”

Voting results show 92 per cent of those who voted support the Ngāti Rangitihi Deed of Settlement.

The Ngāti Rangitihi Deed of Settlement comprises 500 pages of significant detail, which includes an historic account, Crown acknowledgements of how and when it breached Te Tiriti, and the Crown’s apology.

It sets out the return of more than 500 hectares of culturally significant lands, relationship agreements with Government agencies, and an entity to restore and protect Tarawera Awa, with $500,000 of funding, as well as Financial Redress of $11.3 million.

“Our mokopuna will benefit in the future, but we must not forget those who started the journey for us.”

He says this settlement will help achieve key aspirations for the Iwi.

“This settlement means we will be rightfully acknowledged as the kaitiaki and owners of our whenua, and we will help lead the way in the restoration of Tarawera awa — our life force.”

Leith says it was important to communicate the detail of the settlement to iwi members so that they fully understood what was on the table to vote on, and why.

“This was done through a comprehensive voting information pack, regular pānui (newsletters), information hui, social media and livestreaming. Due to COVID-19 resurfacing in the middle of our ratification, we were unable to carry out some of our engagement kanohi ki te kanohi – but we quickly adapted by holding livestream sessions so whānau could still ask their questions.”

The voting results are now with the Minister for Treaty of Waitangi Negotiations Andrew Little and the Minister for Māori Development Nanaia Mahuta, who will decide if the results show ‘sufficient support’.

“There is no doubt in our minds that we have fulfilled the criteria required by the Crown — the ratification process followed was robust, and the results are positive, with 35.85 per cent registered adult members voting.”

If the results receive ministerial approval, a signing ceremony will be held later this year.

“We look forward to having all Ngāti Rangitihi uri join in the celebration,” says Leith.

“There is also still some work to do – this part of our mahi has been about getting the settlement across the line, and the next part after the signing will be electing new trustees to take the trust into the future.”

These new trustees will be responsible for developing the future strategic plan of the trust and to establish social, cultural and economic developments that will benefit all the descendants of Ngāti Rangitihi.

“We encourage our people, especially our rangatahi, our future leaders, to get involved in this next stage of the journey.”

....’full and final’ mentioned anywhere...so it is settled until the next time then.....yes?. ..It does sound as there is a good agreement though.