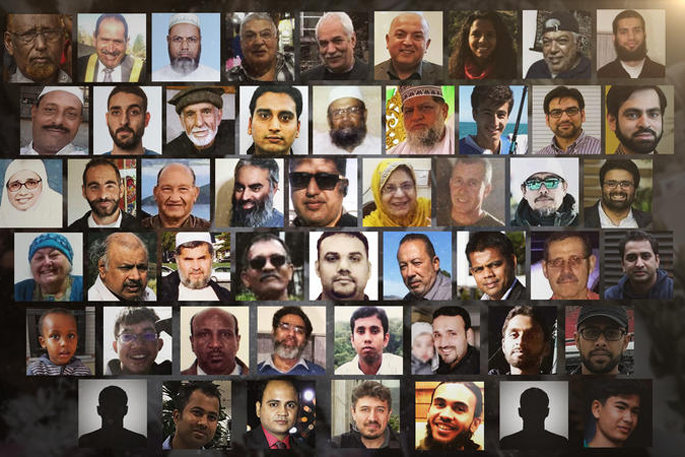 A montage of the 51 victims who were killed during the attacks on two Christchurch mosques. Photo: RNZ

The bravery of Christchurch terror attack victim, Naeem Rashid, saved the lives of others.

Despite being shot Rashid crashed into the gunman, knocking him onto a knee.

Tarrant is being sentenced in the High Court at Christchurch today for the murder of 51 worshippers at Al Noor Mosque and Linwood Mosque on March 15 2019.

This is the first time the summary of facts of how Tarrant carried out his crimes has been heard.

The 29 year old sat quietly and emotionless as his actions were detailed in court.

The summary of facts was read this morning, detailing the terrorist's bloody attack.

Heavily armed and wearing a full tactical vest with at least seven fully loaded firearms magazines and a bayonet-style knife attached, Tarrant entered the grounds of Al Noor Mosque and opened fire shortly after the beginning of Jumu'ah.

In his car were more firearms and incendiary devices fashioned from petrol cannisters.

The summary detailed how Rashid's actions saved lives by allowing others to escape the prayer room after Tarrant entered the mosque.

"The main prayer room is a large open-plan room with few exits. At this time there were in excess of 120 worshippers present. On hearing the first shots this large group had moved en masse towards the only two exits - one in the north-eastern corner and one in the south-eastern corner," the summary said.

"In these corners the worshippers were huddled together and on top of each other attempting to hide from the defendant as there was nowhere for them to escape in the open room.

"The defendant turned to his right and fired 32 shots from his AR-15 into the mass of people in the north-eastern corner of the room. The rate of fire was extremely high and the defendant moved the AR-15 across and back many times.

"While continuing to fire into this group the defendant turned his head and looked at a similar group of people huddled together trying to escape through a single-exit door located in the south-eastern corner of the room.

"When Mr Rashid was approximately one metre from the defendant, the defendant swung the AR-15 around and fired four shots at point-blank range with one shot hitting Mr Rashid's left shoulder.

"Mr Rashid's actions allowed a number of other worshippers to escape."

He murdered 44 people at the mosque and 35 others suffered gunshot wounds.

The terrorist then drove to Linwood Mosque, where he killed seven more and injured five others.

Prosecutor Barnaby Hawes told the court Tarrant was amused by what he had done at Al Noor Mosque.

"The defendant drove away at a high speed. During this journey the defendant was talking and laughing about various aspects of what had occurred and what was occurring as a form of commentary."

He utilised military-specification sighting systems and telescopic sights. He also modified the triggers to allow him to fire the guns at a faster rate.

He also bought some 7000 rounds of ammunition.

The terrorist used the internet to obtain information about mosques around New Zealand including detailed plans, interior pictures, and details such as prayer times and important dates in the Islamic calendar.

On January 8 2019, he travelled to Christchurch from his home in Dunedin to carry out reconnaissance of Al Noor Mosque.

Taking a position across the road, he flew a drone over the mosque and recorded an aerial view of its grounds and buildings.

"The defendant then flew the drone back over the Al Noor Mosque, in particular the entry and exit doors," the summary of facts said.

"The defendant made detailed notes regarding the timings as to entry to the mosques and anticipated times for carrying out the attacks and travelling between the mosques.

"The planned time for entry was to ensure the maximum number of worshippers would be present.

Following the attack on Linwood Islamic Centre, Tarrant left along Linwood Avenue before turning right into Aldwins Road and right onto Brougham Street.

Two police officers in a patrol car were able to ram his vehicle and arrest him without resistance.

During his interview with police he admitted carrying out the attacks and said he went into both mosques with the intention of killing as many people as he could.

"He admitted that the incendiary devices were to burn the mosques down and said he wished he had done so," the summary said.

"He stated that he wanted to have shot more people than he did and was on the way to another mosque in Ashburton to carry out another attack when he was stopped.

"In his interview the defendant referred to his attacks as 'terror attacks'. He further stated the attacks were motivated by his ideological beliefs and he intended to instil fear into those he described as 'invaders' including the Muslim population or more generally non-European immigrants."

The mother of one of the Christchurch terror attack victims has told the gunman she forgives him.

Janna Ezat, whose son, Hussein Ul-Amari, was killed in the attack, says her son used to bring her flowers for her birthday but last year, instead, she was delivered his body.

She told Tarrant she forgives him for what he's done as she has no hate or desire for revenge.

He nodded in response. He blinked heavily and wiped his eye following the exchange.

Victims of the attack have started reading their victim impact statements.

Gamal Fouda, Imam of the Al Noor Mosque, addressed the gunman directly as he read his statement.

Fouda was starting a sermon when the gunman entered the mosque.

"You were misguided and misled," he told Tarrant.

"We are a peaceful and loving community. We did not deserve your actions.

"We go to the mosque for peace and worship.

"Your hatred is unnecessary. If you have done anything you have brought the community closer together with your evil actions."

The convicted terrorist made eye contact with the Imam, but did not react in anyway.

He sat emotionless, shackled and surrounded by Corrections officers.

The parents of Ata Elayyan told the convicted terrorist they would never forgive him for taking their son's life.

Ata's father, Mohammad Alayan, recited the Quran to the court.

Earlier on March 15 2019, he had swapped cars with Ata so he could move property from his apartment.

Alayan told his son to come to Al Noor Mosque early so "he could gain maximum rewards from this blessed day" and swap cars again.

"The day started beautifully - there is no match for Ata's wonderful smile to make a day," he says.

He had met with other organisers at the mosque before prayers began.

The details of the shooting were vague, but he remembered being in severe pain spiritually.

"I was in a state of deep worry about my beloved son praying to Allah that Ata was delayed from coming to the mosque and also in deep sadness for my beloved dead brothers next to me," he says.

They had no news about Ata that day.

"For three days we did not have any news on our beloved Ata.

"Then the devastating news came. Ata had passed away."

When he finally saw Ata's body he was "sitting in his casket as beautiful as an angel with a beautiful smile on his face".

Ata's mother, Maysoon Salama, told Tarrant he had not only killed her son, but his own humanity.

"You gave yourself the authority to take the souls of 51 innocent people. Their only crime in your eyes was being Muslim.

"You terrorised the whole of New Zealand and saddened the world. You killed your own humanity and I don't think the world will forgive you for your horrible crime against humanity."

She called on Allah to ensure he would face the most severe punishment in the hereafter.

"You transgressed and you thought you could break us. You failed miserably.

"Our beloved ones are martyrs."

Ata's mother, Maysoon Salama, told Tarrant he had not only killed her son but his own humanity.

She says she doesn't believe the world will ever forgive him.