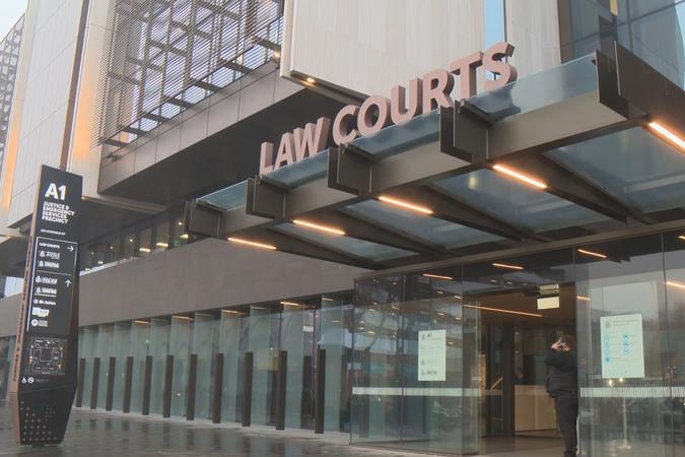 The Covid-19 outbreak has restricted how many people can attend the High Court for the gunman's sentencing. Photo: Simon Rogers / RNZ.

The man responsible for the 15 March terror attacks will be sentenced at a hearing that begins in the High Court in Christchurch today.

Today will be the first time some of the survivors see him in the flesh after his shock guilty pleas at the outset of the first Covid-19 lockdown, nearly a year to the day of the massacre.

The move spares his victims a painful trial and while he will have the chance to speak, the court has made clear it will not be used as a platform for any terrorist ideology behind the crime.

Families, journalists, lawyers and court staff will converge on the High Court this morning for what's expected to be a four-day sentencing hearing.

How it will work

The nature, scale and media coverage of the massacre positions the crime as a highly unusual court case, complicated by the second Covid-19 outbreak.

Despite this, the four-day hearing will follow the usual sentencing format aside from the reading of the summary of facts, outlining the admitted crime, at the start of the day.

This is expected to take some time, given the number of charges, and will be the first time the victims and their families will hear the massacre detailed in open court.

Next, 66 victims will share their victim impact statements, in person, by way of recording or through a supporter, in a stage of the sentencing that will likely take several days.

Crown prosecutors Mark Zarifeh and Barnaby Hawes will then make legal submissions before an amicus curiae, a lawyer assisting the court, will address the judge.

Given the 29-year-old has elected to represent himself at sentencing, either he or a standby lawyer appointed by the court will present legal submissions for the defence. 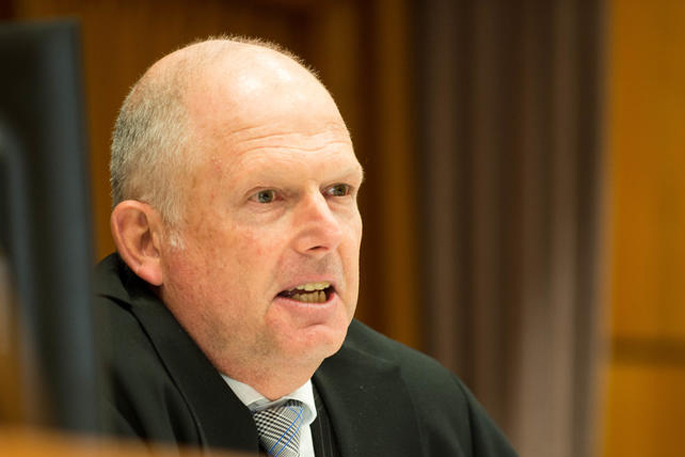 Justice Mander has made it clear the hearing will not be used as a vehicle to cause more harm to the victims. Photo: Conan Young / RNZ.

He will then be sentenced by Justice Mander, who has already foreshadowed the risk the court may be used to promote terrorist ideology and the protections in place to prevent that.

"The court also has a duty, particularly in the context of offending against the Terrorism Suppression Act, to ensure it is not used as a platform and is obliged, to the extent possible, to prevent it being used as a vehicle to cause further harm."

Justice Mander holds a proven track record for dealing with courtroom chaos, having sat on WINZ shooter Russell John Tully's case, and has the power to decide what can be published and when.

On top of this, the country's largest news outlets, including RNZ, have pledged not to allow the attacker to use the court as a vehicle to promote white supremacist ideology.

The court has been forced to scale back its initial plan to accommodate a large number of people in light of the second Covid-19 outbreak in Auckland.

As a result, the number of people allowed into the law courts is limited to 230 people with the main courtroom hosting 35 victims and 10 journalists.

The remaining victims, journalists and 12 members of the public will be seated in seven overflow courtrooms to observe the sentencing via livestream.

The government has extended its "limited exemptions" process to allow 47 victims to travel to New Zealand to attend the hearing in person.

Other victims not in court will watch the sentencing via livestream, which will be translated into eight languages to account for the range of affected cultures.

Journalists from 11 New Zealand outlets and 18 overseas outlets have had to undergo a formal registration process to report on the sentencing.

International journalists unable to travel because of Covid-19 border restrictions will have access to the livestream, provided they comply with strict court orders.

There will be no live reporting of the sentencing and it's expected there will be delays as reporting is only permitted after the midday break and at the end of the day.

People can expect not to see any report republishing the livestream of the massacre or associated manifesto as both have been deemed objectionable by the Chief Censor.

It’s unbelievable how you allow a foreign madman in, arm him to the teeth, and then act all virtuous and saintly. Same with White Island. Slack as laws that lead to death but spin it into how great Kiwis are!

Maybe a more stringent approach to the mosque gunman‘s vetting and this may have been avoided altogether?!