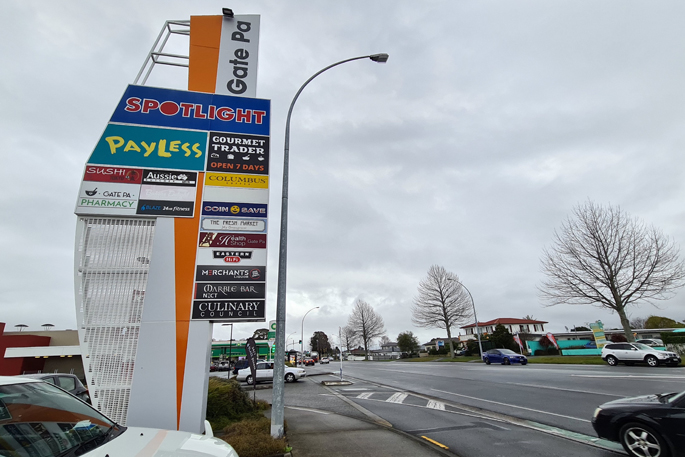 A shop owner was robbed and assaulted on Tuesday. Image/SunLive.

A Tauranga woman and her son are still shaken after witnessing a robbery and assault at a Gate Pa shop.

The woman who did not want to be named says she wants to get counselling for her six-year-old after the incident on Tuesday afternoon.

The pair had finished grocery shopping at Gate Pa shopping centre around 5pm and stopped at the store to get a toy when the robbery happened.

The owner of the business who also wants to remain anonymous says a young male and female tried to take clothing without paying, he and another staff member went to stop them and followed the couple outside.

He tried to stop the pair but was punched several times by the male and his female staff member was pushed to the ground, he went to help her and was punched in the back and back of the head, he says.

The pair left with the items after the scuffle and the male returned around minute later with a tyre wrench, says the man.

The woman shopper says he was swearing and talking about how his girlfriend had been hit during the fracas whilst wielding the wrench.

The business owner says the wrench was about 50cm long so he went in side to find a tool to protect himself with and upon seeing the item the offender left with no further incident.

The female shopper called police during the fight and the owner says the offenders were located about 30 minutes after the incident.

“My six year old son tried to get into it as well to stop them and he was screaming at them to stop fighting,” says the woman.

“He was petrified, I actually locked him in the car at one stage so that he would stop screaming and trying to get in there and stop it.”

“It was pretty scary and intense was just the whole situation wasn't very acceptable.

“It’s actually really scary, to be honest. I mean, robberies happen and as adults we can kind of cope, but having a young child, he did not cope with the situation.”

She says the owner is amazing and gave her son a jumper because he was cold and in shock when they were waiting for the police.

The owner says robberies have become more frequent and in the last two he and a staff member have been assaulted.

He says in the past if the store was robbed it was up to $100 worth of stock taken but now people are taking more and there have been incidents where the offenders had a car waiting.

Since the first theft and assault he hasn’t taken a day off because he is worried about his staff being hurt, he says.

He isn’t the only business in the centre that has to deal with thefts, he says.

A police spokesperson says police were alerted to a shoplifting incident at a Gate Pa business on August 18.

A 17-year-old male has been charged with a number of charges including shoplifting and common assault and he is due to appear in the Tauranga Youth Court next week, the spokesperson says.

“A 17-year-old female has been given a formal warning and referred to Youth Aid.”

No reason to stop

When offenders are not punished for wrong doing, there is no reason for them to stop. Stealing clothing! really? That is greed not need. Pure and simple. Punish them and make an example.

... to be strengthened. Cameras and Private security patrols. These kids are old enough to know better but too young to face the full force of the Law. Maybe it’s time the whole question of Youthful offenders was reviewed...

They have no right to be in society. I wish them all the worst.