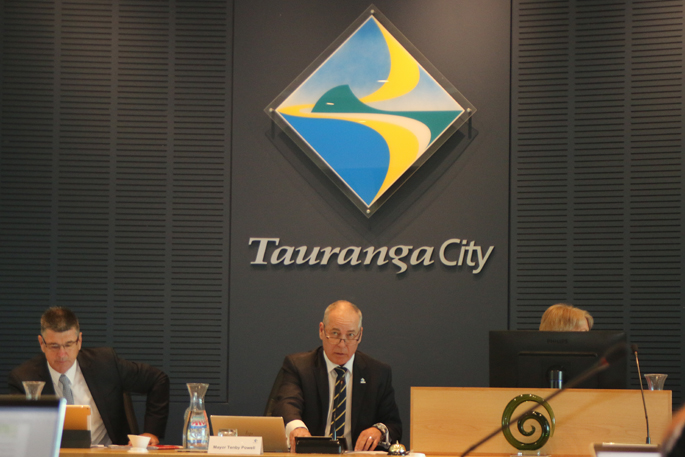 Tauranga City Council has agreed to appoint an observer team to help resolve their ongoing conflicts.

This decision follows an emergency meeting to discuss the report from the Department of Internal Affairs.

Elected members have voted in favour of option two, where council will initiate action to proactively address the situation.

At today’s meeting, the elected members considered a report on governance issues and a recommended plan to address strained relationships which have been the focus of media and social media commentary.

The ongoing issues include Tauranga Mayor Tenby Powell being censured for inappropriate language and comments made about councillors in an internal council meeting in March.

Powell says he sees the appointment of an observer team a good move.

“I am sad we got to this point. Collectively, we have to change.

“It’s time to move forward and to work together. You have my commitment that I will do better.”

At the meeting Grainger told others he had “never seen anything like this” in his five terms on council.

“There has been hate and personal grievances, but nothing like this.”

Councillor Baldock says he has also seen some “bad behaving” in the past, but this is the first time it has been out in the open.

He welcomes the opportunity to getting in “referees” to ask questions about councillors behaviour.

Councillor Kelvin Clout says the toxicity within council must come to an end.

“We can do better, we must to better.”

The DIA has requested the council provide assurance and evidence that it is taking proactive steps to “restore trust and confidence in its ability to meet the Crown’s expectations of a high-performing council”.

What does option two involve?

Option 2: Initiate by Council Resolution Action to Address the Problem

· Enables the Mayor and Councillors to have a high degree of control and to design a process which is agreed by majority to be appropriate in the circumstances.

· Reduces the likelihood of direct Ministerial intervention under Part 10 of the LGA.

...I’d be in favor of giving the people concerned another chance and trying to salvage something from the debacle. But not this time. There is no REAL intention to bury hatchets (except maybe in each other’s back) and the sooner this extraordinary and shameful situation is closed, the better for everyone concerned. If they were really made of "the right stuff" they would have resolved this long ago. They haven’t, and they haven’t resigned either. I believe it is now irreparable and the only solution is a clean sweep. Swearing and shouting could never be acceptable and 10B should have tendered his resignation weeks ago. But both factions are culpable and none of them deserve to be there.

Unfortunately people cannot change their personalities. Things may simmer down for a short while but sooner than later the same clashes will surface. There is only one fix - and that is for Powell to resign. It must be difficult for him and his family to continue living here with the weight of the majority of ratepayers so much against him. He should take the ’highway’ - the only solution!!

Listened in to this self serving debacle. The Mayor certainly has the gift of the gab and somehow still rates himself as a victim. BTW that’s the only way he contributes to rates. Was that Danny Cauncion sitting prominently in the gallery,and Susan Devoy and other notables.Wonder who they were there to support and why?

This will be this Council wasting ratepayers money again. My view is that it won’t work while we have Mayor a former Army Colonel who sees himself as "the Boss" and the elected members as subservients. All I can see is a Mayor who abuses people who disagree with him. He needs to resign immediately and be replaced by a democratic individual who will work with democratically elected members. This Council is absolutely diabolical in how it operates.

How many other Councils have an observer whose role is essentially to act as a deterrent to intra-Council conflicts. The mere fact that central government is aware of this poorly performing Council led by an appallingly behavioured Mayor MUST be enough to oust him as he, in his own words, is too much of ‘soft c***’ to resign.

vote them out problem solved

A couple of issues here. First, they cannot restore what they never had. The people of Tauranga have had no confidence in TCC for years. Second, they have never been been high performing. They are all just talking platitudes and slogans, just like at election time. This is a complete waste of yet more money. The ones who have provided comment should just go. Powell and Baldock are dictating bullies. Clout is a spineless turncoat. Abrie says it’s not “his bag”. Well, just go then! GO. NOW.

What was Option 1? Collective resignation? Would have been my preferred option. Now we are just paying some consultants to sit and watch people tip toe about on pretend best behaviour. The chief protagonists should just bugger off.

Get the broom out

Sweep the floor absolutely clean. Not sure of the protocol but a flush out and a new election would be a good idea,

Surely the observers be paid from existing budget for elected members salaries! We the ratepayers should not chump up further funds for their toxic environment.