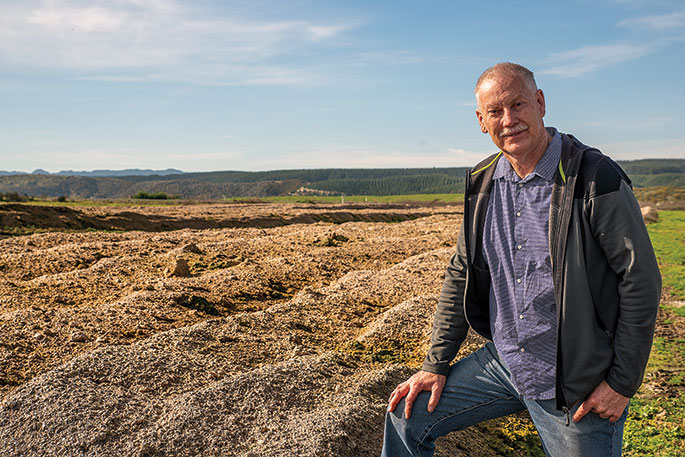 Tom McDowall and Tom Fell (not pictured) have created a worm farm juggernaut in Kawerau that processes bio-solids from all Bay of Plenty Councils' sewerage systems. TROY BAKER / WHAKATANE BEACON

Worm farm juggernaut Kawerau Ecocast is already New Zealand’s biggest worm farm and is about to get even bigger.

The worm farm on the outskirts of Kawerau already takes biosolids from most Bay of Plenty councils’ sewerage schemes and, with a new contract from Tauranga City Council and a commercial loan from the Provincial Growth Fund, it's expected to grow to cover around 10 hectares of Maori-owned land.

Co-owner Tom McDowall says Ecocast began as a small business on his lifestyle block designed to fund his son’s tertiary education, but it had grown into a large, environmentally friendly operation in which bio-solids were transformed into rich compost.

The new contract and a Provincial Growth Fund loan would allow the business to purchase equipment such as a new tractor and compost turner and employ double its current staff.

“We didn’t expect that it would expand to be this big but as soon as we started, we could see the potential,” McDowall says. “We just constantly worked away at it.”

Biosolids from district councils and septic tank cleaning services are transported to the farm and fed to the worms along with pulp waste from the nearby Norske Skog paper mill.

Historically both the pulp waste and biosolids were sent to landfill but the worm farm provides a cheaper, and greener, alternative.

The incoming biosolids are dumped in a concrete pit then combined with wood fibre before being laid in windrows. 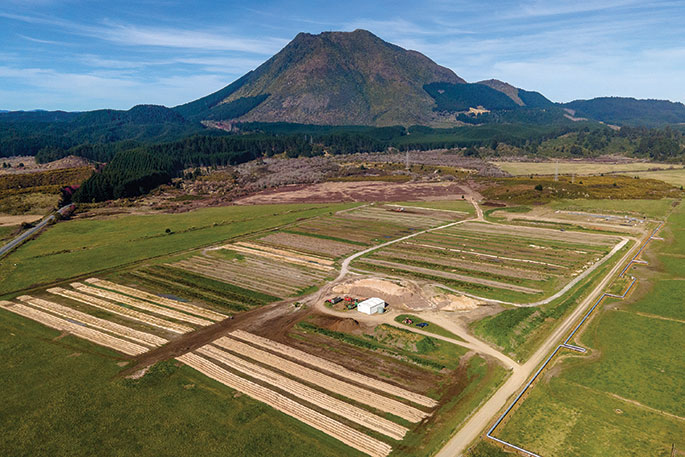 “We did do a lot of experimentation with the biosolid and pulp mix to ensure we got the best ratio for the worms.

“We are using simple tools to enhance nature’s own ability to deal with waste. This is an economical, environmentally friendly operation that has good value for councils and customers.”

The site processes between 30 and 50 tonnes of waste each day, with each tiger worm consuming its own weight in food every day.

The tiger worms naturally migrate between windrows to those with more food and are prolific breeders, however, McDowall says they also seeded the windrows with worms.

It takes 12 to 18 months depending on the weather for the waste to be transformed. It is then mixed with green waste into a rich compost that is sold through Plateau Compost. Commercial properties like kiwifruit growers are the main compost purchasers.

McDowall is not sure if the operation can be replicated elsewhere in New Zealand as the Bay of Plenty, and Kawerau, have unique natural features.

He says worm farms had to be able to source waste from tertiary wastewater treatment plants or oxidation ponds, be on highly permeable soil and in a place with low rainfall.

Rotorua Lakes Council was the first council to sign a contract with the business and delivers biosolids every day, around 10,000 tonnes each year.

While he is proud the business offers a cost-effective alternative to landfill, McDowall says the environmental factor was also incredibly important to him.

Rotorua Lakes three waters services manager Eric Cawte says the potential for positive environmental impact was the main factor in the council’s decision to send its biowaste to Ecocast, as, at the time, it cost the same as sending it to landfill.

However, after the Government increased waste levies, the council now saved around $390,000 a year on disposal.

“It also means that the nutrients and carbon in the biowaste are returned to the land and are beneficially reused rather than having a negative impact on the environment,” says Cawte.

When Whakatane District Council is undertaking sludge removal from its oxidation ponds, the sludge is transported by contractors to the worm farm.

Council three waters manager Tomasz Krawczyk says this was a commercial choice rather than a council decision due to the proximity of the worm farm.

“Having Ecocast operating in Kawerau is a considerable help as it cuts down costs of transportation to remote facilities."