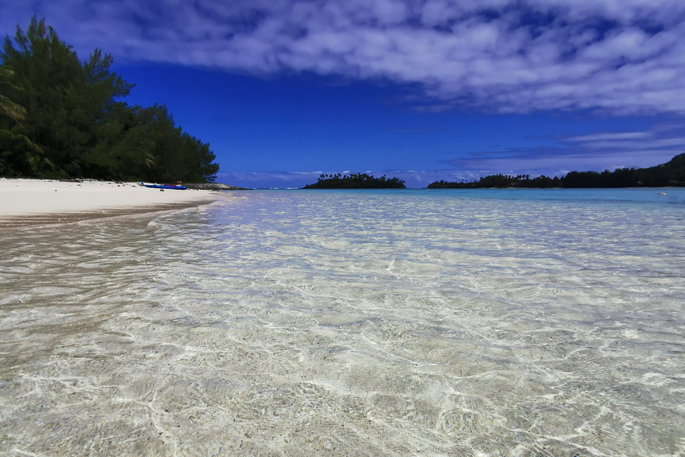 Of the 66 who went on overseas holidays, two-thirds travelled to the Cook Islands (pictured) and other Pacific nations including Samoa and Tonga. Photo: Ian Evans.

A small handful of New Zealanders have been on tropical holidays since the country went into lockdown.

They're among close to 1000 people who travelled overseas then returned to the country between March 20 - a few days before full-scale lockdown - and June 1.

Official figures provided to RNZ show of the 66 who went on overseas holidays, two-thirds travelled to the Cook Islands and other Pacific nations including Samoa and Tonga.

Its senior demographer Kim Dunstan says the reasons for travelling were marked on airport cards - holiday, business, visiting friends or relatives, and other.

Kim says it was mainly New Zealand citizens arriving, while foreigners made up a large portion of departures - and the numbers were but a smidgeon of last year's tens of thousands who crossed the border.

"Typically there are tens of thousands of New Zealanders and overseas visitors crossing our border but the numbers have shrunk dramatically since March."

The Kiwis who ticked 'holiday'

Airport cards give a snapshot of the reasons people travel overseas - business, holiday or other.

Of the 66 who ticked "holiday", 45 travelled to the Cook Islands and other pacific nations including Samoa and Tonga.

Still some appetite for travel

House of Travel commercial director Brent Thomas says it showed there was still some appetite for travel.

"There's always going to be some people that deem it from their own personal point of view valuable to go overseas and often they are because they have special occasions or something like that to attend."

He says forward bookings for next year were slim and the industry was still focused on providing refunds for those whose 2020 travel plans were cancelled due to COVID-19.

"There are a number of people who are still coming and having conversations about future travel whether that be late 2021 or even into 2022 but the numbers for those bookings or enquiries are still relatively small compared to what we would normally be looking at."

Veteran broadcaster Paul Henry ticked "other" when he returned from California earlier in the month.

"I wouldn't have gone if it was just holiday so I suppose you'd have to say based on that it was business," he says.

Paul was in managed isolation at an airport hotel, after returning from Palm Springs where he's been writing a book and having a holiday for a few months.

He says he would carefully weigh up any future trips.

"That will be something that I will have to consider, whether or not what I'm doing there warrants spending another two weeks in quarantine because it's a sacrifice in time. I'm an old man now, I only have so many two week blocks left."

Paul arrived before the $3000 charge applied to travellers returning from short term business trips and holidays - a per-person co-payment covering 40 per cent of the government's total managed isolation cost.

The government has indicated it will allow exemptions to the charge, including for those returning home permanently.

The minister in charge of managed isolation, Megan Woods, says if charges had applied when isolation hotels were set-up in April, the government could have collected $3 million.

"We had to draw a line in the sand somewhere, in terms of putting in a place the system for being able to charge people.

"We do know that we're coming into a period where people have more time off work and if people are thinking about taking holidays then they do need to factor in the cost of their managed isolation when they come back."

Woods says it remained to be seen how many people would go on holiday with the co-payment charge in place for managed isolation.

A Flight Centre spokesperson says they had received interest from people keen to book a holiday in the UK and Europe, and even the odd OE following the announcement Europe would open its borders to New Zealanders.

Why wouldn’t you want to go on holiday? There’s a cold going around but it’s in NZ anyway. Time to open the border and carry on as normal.