Oropi community mourning the loss of Colin the cat 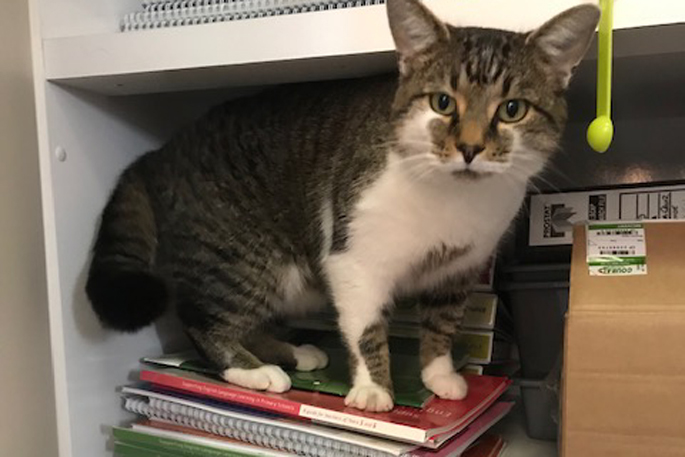 Colin showed up on school grounds about five years ago, and then became “part of the furniture”.

The Oropi School community is mourning the death of their "iconic" school cat Colin.

Dozens of written tributes from students and parents have poured in for the beloved cat, who was found on Oropi Road by a school neighbour on Wednesday night after being hit by a car.

Oropi School principal Andrew King says the school community needs some time to grieve the death of Colin, who had become part of the school's furniture over the years.

"He was part of the furniture, our little mascot and a very special school pet."

A tree is being planted on the school grounds in the coming days as a way to remember Colin. A bench and plaque will be installed underneath the tree.

Colin became the school pet about five years ago, after turning up on school grounds hungry, says Andrew.

"We thought he was a stray cat. We fed him and he decided to hang out with the kids in the playground. Then he made a home inside one of the classrooms.

"After that, the kids made him a hut and a bed. Everyone was scheduled to take turns feeding him. He would turn up to all our events like Athletics Day, and Calf Club Day.

Andrew reflects on Colin’s extroverted personality, saying it was like he knew it was his job to welcome everybody.

“So sad to hear. He has well and truly left his mark on the children and the school. RIP super cat Colin,” another added.

Colin helped create a strong sense of community and togetherness within the school, says Andrew.

“Having a school pet was really good in terms of developing our whole school culture – he was our mascot and our messenger. It was a way of bringing our community together.”

“He was there for kids to cuddle and carry everywhere – animals play a role in helping kids develop a sense of care for others.”

The school has hosted several fundraising events for Colin’s vet treatment, including a school disco when he got quite sick two years ago.

Due to alert level 2 restrictions, a school-wide memorial can’t take place. But Andrew says classes will be able to visit Colin’s tree over the next week to pay tribute.

Rest in peace Colin. I am glad you found a home where people cared and loved you.