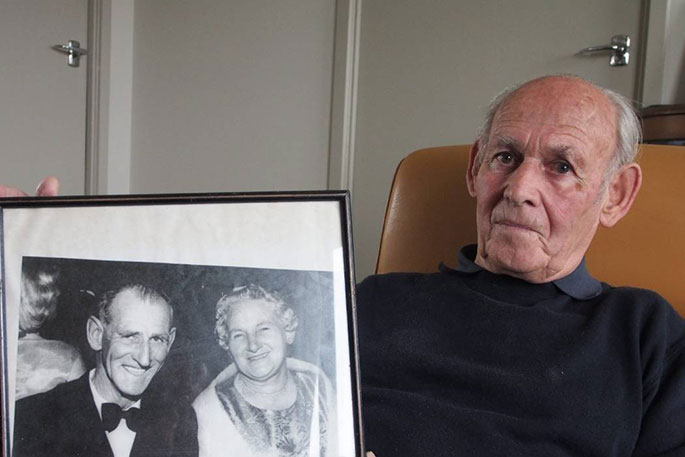 Graeme Ardern made a promise to his late father Robert Lear Ardern (pictured) in 1974, to fix a typo on a Tauranga street sign. Photo: Stuff.

A Tauranga street was supposed to be named after Prime Minister Jacinda Ardern’s distant cousin but it has been misspelt as Arden for 60 years.

Forty-six years ago, Graeme Ardern made a promise to his late father to fix the typo on the Gate Pa street, but now he fears he will die before doing so.

The street names in the surrounding suburb were all named after families who lived in the area historically, with the PM’s cousin, Mary Ardern, marrying into the Murray family who owned much of the land.

Graeme Ardern promised his father Robert, who is Mary’s great nephew, in 1974 that he’d have the mistake fixed, but his father died of a heart attack in April.

Ardern says his father often spoke about the typo and wanted to see the name changed.

“The Murray family have been great and very supportive in regard to changing the name. They told me they all knew the name was spelt wrongly and it would be great to see the Ardern name finally spelt correctly.”

It was not until 2019 that Ardern put his plan to alter the name into motion. He'd struggled with injury and ill health, including having a quadruple heart bypass and a stroke, but wanted to keep his promise to his father before it was too late.

In January 2020, Tauranga City Council sent residents of Arden St a letter requesting permission to change its name. Of the 17 houses on the street, 80 per cent needed to agree, however five said no.

“This is the street I’ve lived in for years,” says Lois.

“There’s a lot that goes into changing your address and if they waited 50 years to do so it can’t have been that important.”

Ardern is appealing to residents to reconsider, saying it would mean the world to him.

"It would be a promise fulfilled.”

Tauranga City Council general manager of corporate services Paul Davidson says it has found documentation that showed the intention had been to name the street Ardern, not Arden.

"The Ardern family had a strong link to the area," he says.

“We’re disappointed we were not able to help the (them).

“However, we can understand that some residents might prefer to avoid having to change their street name on official documents and with multiple service providers.”

Sorry Graeme but you shouldn’t make promises that you cannot keep and that are out of your control HOWEVER I do agree with MURRAY GUY in this instance. I also agree with MOMMATUM that you should not be trading on your relationship to our Prime Minister. It’s not about name dropping. Stay real.

With Murray Guy.If it was a Maori name they would just say it was in breach of the treaty like they do with everything else.

If you change it probably all the houses in the street will be up for sale !!!!!!

Is NOT a name change, it is a correction.

Tauranga City Council, this is so wrong! A street is incorrectly spelt and correction is required. IT IS NOT a NAME CHANGE, it is a correction. as should happen, If this was of maori interest it would be corrected with NO consultation other than to advise residents of the spelling correction. Insulting, offensive, lacks integrity.

Leave It As Is

Sorry Graeme, but I don’t consider sentiment to be any justification for something as drastic as changing a street name, n Nor do I appreciate your trading on your relationship to our Prime Minister as a sympathy ploy. While it might “mean the world to you” civic affairs should never be guided by sentiment or emotion. It’s been Arden street for years. A change is unnecessary but I also take surfsup’s point and I happen to be Maori, The same should apply when ethnic sentiment and historic guilt tripping is used to “suggest” (more like demand) name changes.

just leave it as it is. no need to change

I can appreciate the frustration at this not getting done due to the objections raised. As long as the same rules apply when the topic of changing street names or road names apply when Maori names are suggested I will have no problem.

People in favour could support Graeme by changing the mailing address anyway. The mail will still get through. My parents once received a Christmas card addressed Bombyard Street instead of Bongard Street. Of course, changing the address would apply only to handwritten mail, as computer based address systems choke on misspellings. Please don’t give up Graeme, errors do need to be fixed.