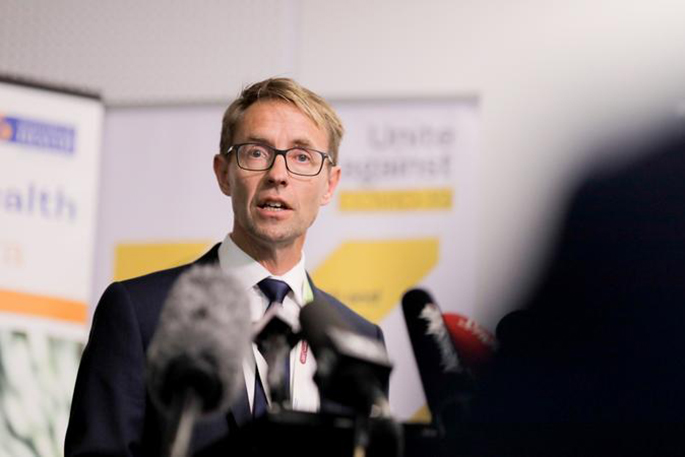 There are now 69 active cases of COVID-19 in New Zealand.

From the 13 new cases, 12 are new community, all in Auckland and all connected to existing cases, says the Director-General of Health, Dr Ashley Bloomfield. There is also one new case in managed isolation.

Dr Bloomfield none of the new cases have travelled outside the Auckland region recently.

He said from early investigations, all had a connection to the existing outbreak as close contacts of cases already reported.

Two of the new cases are household contacts of the case previously reported that is still under investigation - the GP from Mt Wellington.

Three people are now in hospital. Two are in an Auckland city hospital ward and one is in a Middlemore hospital ward.

One has previously been reported as already in hospital, one was admitted overnight from a quarantine facility and the other was a community case.

The one case in managed isolation is a child who arrived in New Zealand on August 3. They had been in isolation at the Pulman Hotel in Auckland, tested negative on day three of their stay and subsequently tested positive at day 12 test. They have now been transferred to a quarantine facility.

Dr Bloomfield says 66 people have been moved to managed isolation facilities, including 29 people who had tested positive.

There are now 69 active cases, 49 from the community and 20 imported.

Dr Bloomfield says 1536 close contacts have been identified from the community cluster - as of 10am today 1322 of those people have been contacted.

Health officials are working closely with two religious organisations in regards to its contact tracing work. It is likely more information about these organisations will be released later today, Dr Bloomfield says.

One of the positive cases visited Toi Ohomai Institute of Technologies Tokoroa campus before they were feeling unwell on August 10-11.

The total number of confirmed cases for NZ is now 1271.

The Minister of Health Chris Hipkins says 23,680 tests were processed yesterday, and it was taking longer to get results than usual because of the high volume of demand.

He said the usual 24 hour turnaround is now 48 hours, but positive results were reported first, and high risk swabs headed to the front of the queue.

Hipkins said he was pleased with the speed and efficiency of testing staff.

"The system is working at top speed."

Hipkins says travel in and out of Auckland remained very restricted, but police were seeing an increase in people trying to get in or out of Auckland.

As at 4pm yesterday, 50,468 vehicles had been stopped at checkpoints around Auckland. Of those, 676 were turned back. 428 of those were seeking to leave Auckland - the rest were trying to get into Auckland.

Talking about the legality of making masks compulsory to wear while in public, Hipkins says the main issue at the moment was a supply issue.

Five million masks have been released with three million going to community groups for those who can't afford masks, while supermarkets are working to stock up on them

"But look, here's the reality, we could make it compulsory and spend a lot of time on enforcement, what we need here is a cultural acceptance amongst all New Zealanders, that if we're encouraging you to wear a mask, we're doing that for a reason,” says Hipkins.

Hipkins says New Zealand is actively exploring all options for a vaccine, and making sure the country was "ready to go" when a vaccine is available.

"On the health end, we're focussed on being ready when a vaccine is available."

Find out more on the Unite Against COVID-19 website.

Where to get a test for COVID-19 in Auckland

If you have symptoms you can:

People in other regions can check their local district health board website to find out about testing in their area.

Regional exemptions at Alert Level 3
The Auckland city "border" is currently closed. Some exemptions will be allowed. For more information, including how to apply, see advice for travellers.

Social media is explaining the way NZ first contacted Covid 19. Seemingly it is still a mystery. Public is being told to ignore Social Media - however it seems that in light of no clues from the Minister of Health as to it’s origin, it offers a believable story as to its origin and how the family were able to afford the very expensive and expansive trip they took in just those few days. It fills in all the gaps. True or false? Let the public decide. Will ’Sunlive’ publish this comment? Let democracy rule in this case.