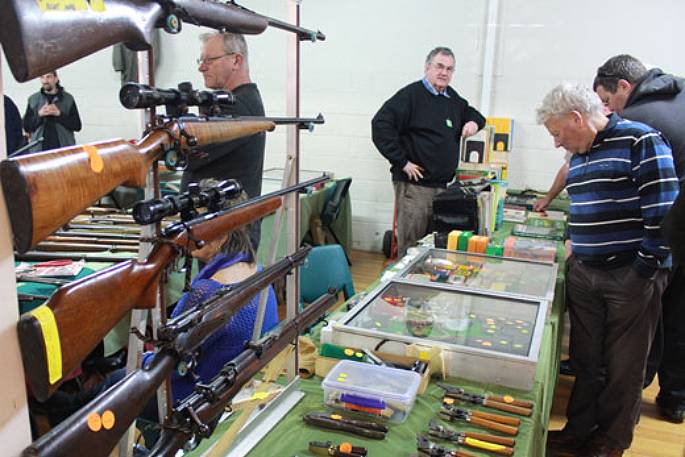 Militaria enthusiasts from all over the North Island attend the annual event. File photo: Cameron Avery/SunLive.

A militaria show that is due to be held this weekend in Greerton by the organising group, Tauranga Militaria, has been cancelled due to COVID-19.

The decision comes following confirmation of the first four cases of community transmission in more than 100 days in New Zealand.

On Tuesday night, Prime Minister Jacinda Ardern and Director-General of Health Dr Ashley Bloomfield announced the four cases, all from the same family in Auckland.

Thirteen more cases have since arisen from the initial four.

“Regretfully this weekend's Tauranga show is cancelled.  This was not an easy call for the organisers to make. Sadly, COVID-19 wins again.”

Under alert level 2, no more than 100 people can attend gatherings including weddings, birthdays, funerals and tangihanga.

Spokesperson for the Tauranga Militaria show, Tony Daw, says they are truly frustrated at having to cancel the show.

"A lot of people have put a lot of work into this show and into the displays.  We've run this show from the Greerton hall for the last 23 years.

“It's so popular with people from all walks of life and all ages.

“We get 300-400 people that come along. We had to make the call because so many traveling in needed to cancel accommodation bookings to get their refunds.

“They usually frequent the local RSA, takeaways and the like, while here.  It's just frustrating to say the least."

Avid attendee of past shows, Kingsley Field told SunLive that he and other militaria enthusiasts come from all over the central North Island, Hawke’s Bay, Palmerston North, New Plymouth and Auckland regions, to attend the annual event,

Any changes to New Zealand current alert levels will be announced by Prime Minister Jacinda Adern at 5.30pm today.

NZAHAA finds, collects and preserves, of all forms of militaria.

They run regular militaria shows across NZ and have an annual national shoot where original and reproduction arms are demonstrated.

The Association was formed in 1959 in Christchurch by a small group of enthusiasts and was known as the New Zealand Antique Arms Association.

Over the ensuing 50 years they grew to 1000 members, with 12 branches scattered across NZ.

With this growth came a diversity in collecting interests.

They changed their name to the New Zealand Antique & Historical Arms Association to reflect this.

They also publish a quarterly magazine.

You must be at least 16 years of age and of good character to become a member.