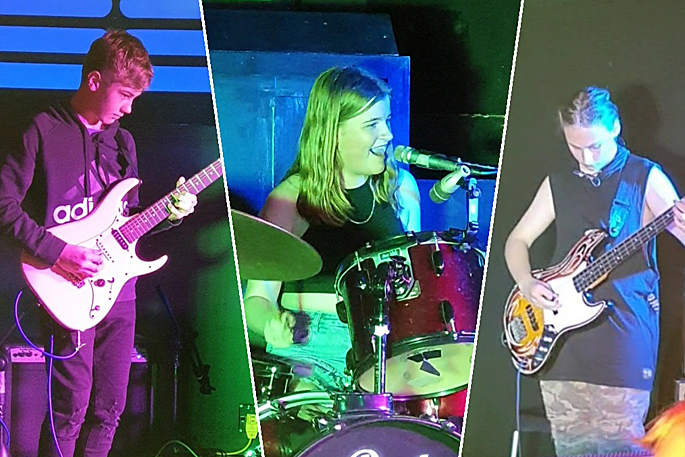 The winners have been announced for this year's regional Bay Of Plenty Smokefreerockquest competition.

Coming first in the band category is rock band O.C.D from Papamoa College.

Drummer and vocalist Maysen Mitchell says that when the band heard about their win they were surprised and then super excited.

“I think we stood out because you never see a female drummer, let alone a drummer and singer,” says the 14-year-old. “We've put in a lot of practice and we are so grateful to be chosen for 1st place.”

The full line up for O.C.D is Maysen Mitchell on vocals and drums, Adam Levison on bass, and Josh Young on electric guitar.

O.C.D win a prize package from the Rockshop and are going into the national selection pool for the event’s live national final, held at the Dorothy Winstone Centre, Auckland on September 12th.

Second place in the band category went to CANVAS from Mt Maunganui College and Papamoa College.

Both bands now join the Bay of Plenty regional solo-duo winners Bri Hilton and Taupo-nui-a-Tia College (first) and Mabel George Mt Maunganui College (second) with the opportunity to submit a video of their original material for selection as one of the top 10 national finalists.

Chairperson and General Manager Matt Ealand reflected on the role played by the platform to encourage smokefree lifestyles.

“The relationship between Smokefree and Rockquest Promotions goes back 28 years. We have seen the culture around smoking and music change over that time, and that is something we are really proud to have been a part of.”

The full list of awards for the Bay Of Plenty region is:

Smokefree Tangata Beats is run alongside Smokefreerockquest with a focus on the unique cultural identity of Aotearoa New Zealand and the South Pacific.

The Smokefree Tangata Beats regional winners were announced last week, with the national finalists being announced  August 7 and going on to compete at the live national finals on September 11.