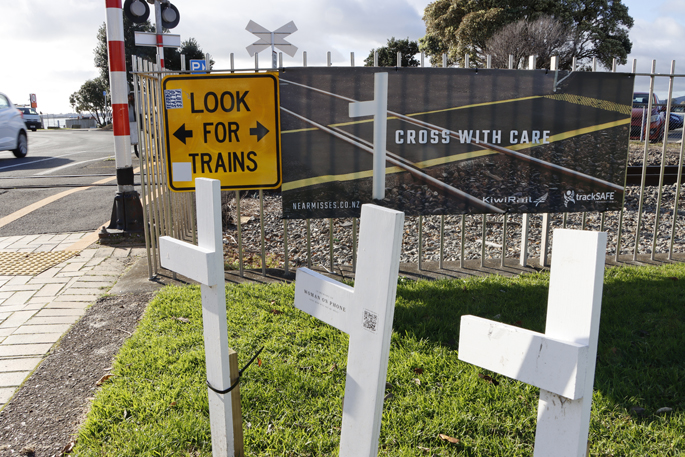 Last year, there were 320 near misses on railway tracks- that’s almost one a day and any one of them could have resulted in a fatality. Image: Daniel Hines/SunLive.

A moment of inattention could cost you your life on a train track.

This is the message from Police, NZTA and the Government as part of Rail Safety Week.

“Unfortunately, some people are complacent about crossing railway tracks. They are looking at their phone, have headphones in or are simply not paying attention as they step out onto the tracks.

“Others deliberately cross despite the warning signals. As well as risking their own lives, this can lead to copycat behaviour by young children with devastating outcomes.”

Transport Minister Phil Twyford says installing safety infrastructure is crucial, but people need to be more careful around trains too.

"We’re making good progress rolling out upgrades like automatic gates to save lives, and there’s more on the way.

"On top of that, KiwiRail and Waka Kotahi New Zeland Transport Agency have also completed upgrades to 17 level crossings around the country, with another 20 to be completed before the middle of next year. They are also looking ahead to what could be in the next phase of upgrades."

Since 2013, 110 pedestrians and motorists have died in collisions with trains in New Zealand, with 43 of those deaths at level crossings, another 68 people have been seriously injured.

"The people we have lost are more than a statistic,” says Twyford.

“They are friends, whanau and colleagues. Each one has a story and has left loved ones who are grieving their loss.”

McKennie says not all rail crossings have bells and lights, and even if they do you, you are less likely to notice them if you don’t make a conscious effort to stop, look and listen.

A moment of inattention could cost you your life on a train track, he says.

“Just as pedestrians should always cross tracks with care, so should drivers and riders.

“Drivers must always obey bells, lights, and barriers – and where there are none they should always look both ways before they proceed over a railway track.”

Last year, there were 320 near misses on railway tracks- that’s almost one a day and any one of them could have resulted in a fatality, says NZTA general manager safety, health and environment Greg Lazzaro.

“Near misses with trains can be reduced if people stay alert and comply with signs and signals in place to help you cross safely.

“It’s vital when you’re around trains, tracks and level crossings to take notice of your surroundings and cross with care.”