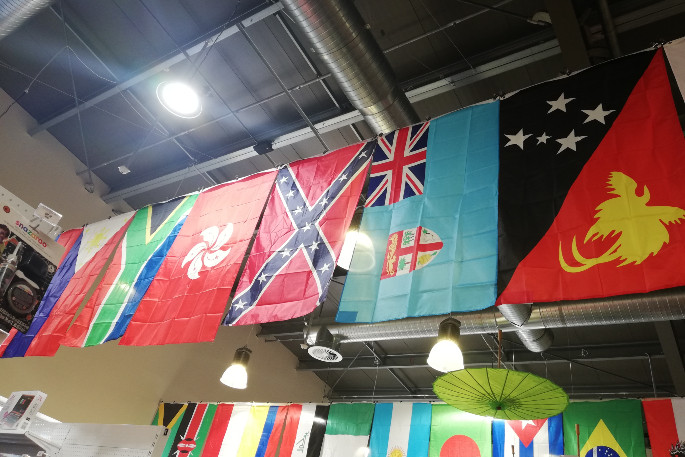 The Confederate flag hanging in AJ’s Emporium before it was removed. Supplied photo.

A Tauranga home goods store has stopped selling the Confederate flag after receiving complaints about what it represents.

The flag was removed from AJ’s Emporium last month, but previously the store had sold the item for the past 10 years.

Tauranga woman Yasmin says she complained because the flag is an “absolutely foul symbol of racism and white supremacy”.

The Rotorua Stockcar Club recently announced it would no longer fly the Confederate flag after drawing criticism from Race Relations Commissioner Meng Foon.

AJ’s director Ange Dunn told The Weekend Sun she doesn’t believe the flag is a symbol of racism.

She says the store sells a variety of flags including country flags, rainbow flags and the Maori flag.

“I am sure we all have something in our lives that offends others, but I thought we lived in a democratic world.

“We sell a large variety of flags which if you think about it some people would be offended by - the German flag would offend Jews.”

She says the Tauranga store has more than 2000 customers each week and they have only received two complaints about the flag over the past 10 years.

Yasmin, who first complained alongside her partner in-store on July 21, says it was a struggle to have the flag taken down at AJ’s Emporium.

After AJ’s staff members declined her initial request, she followed up with Fraser Cove Management and then property management company Silverfin.

Yasmin says she was “angry and disheartened” when staff refused to remove the flag initially.

“Being told that the Confederate flag means different things to different people just doesn’t cut it. There is only one explanation for that flag.”

AJ’s Emporium in Rotorua has run out of stock of the confederate flag, Ange says.

She wouldn’t confirm whether or not they plan to order in more stock.

Fraser Cove asset manager Marie Mischewski says they have no control over AJ’s Emporium as the building is managed by Silverfin.

However, after receiving complaints she passed them over to the property manager.

“Eventually I got hold of Silverfin and told them this is something for them to sort - which they have.”

Silverfin would not say whether they asked AJ's to stop selling the Confederate flag. However, a staff member says they were made aware of complaints.

A spokesperson for the Human Right’s Commission says AJ’s Emporirum should consider whether they want to continue stocking the Confederate Flag.

“People have the right to freedom of expression. However, it is important for people to be thoughtful about how they express themselves or what symbols they choose to associate themselves with.

“Around the world there is a public debate about racism represented by historical symbols and monuments. The Confederate flag is politically loaded and has been known to be used by white supremacist groups.”

Both NASCAR and the state of Mississippi have decided to stop using the Confederate flag since the death of George Floyd, as has the Rotorua Stockcar club, says the spokesperson.

I also believe in free speech and freedom of expression. Good to see this has brought discussion. Among the discussion points to cover is “with much freedom comes much responsibility “. Well done to those who take the responsibility of respect to ALL cultures and beliefs.

A great many people died for what they believed in under that flag, regardless of if you agree with them and whose ancestors live on is irrelevant. History remains to remind us of what could happen in the future. Who ever asked for the removal of such a recognized symbol should be ashamed. Like the stock car club from Rotorua, what a PC replacement.

I agree very much with your post. The FACT is that history has unpleasantness in it but that doesn’t mean we must expunge it because it might offend somebody. We should be learning from it and behaving like grown-ups. Take responsibility, make fair reparation for injustices, and then move on, together. I am not responsible for anything my forbears did and neither are you. (We were not born...) But, we need for wrongs to be addressed so everyone can move forward. Abnegating someone else’s rights because you think your rights have been abused, is like promoting promiscuity in defense of virginity.

The shop should not have to react to the complaint of one misguided over sensitive person looking for something to complain about. The flag is no longer a symbol of anything. It has its place in history and there is no reason not to sell it.

By the same criteria the South African flag has to go immediately.

“The red represents the blood of Christ. The white border represents the protection of God. The blue ‘X’ represents the Christian cross of Saint Andrew, the first disciple of Christ Jesus and patron Saint of Scotland. The 13 stars represent the 13 Southern states of succession.” nothing to do with racism.... PUT THEM BACK UP WITH A PRINTOUT OF THE REAL MEANING....WE ARE A CHRISTIAN BASED COUNTRY JESSE

The flag also represents history. We cannot change history but we can learn from it. People don’t fly this flag for it’s historic features. It’s totally different now. Stop being pathetically mamby pamby. AJ’s you should stop selling the Maori flag as it is flown racially at all their protests. We should ban the movie Roots. Captain Cook should be wiped from all historical documents and as for 1 fish, 2 fish, red fish, blue fish . . . oh my GOSH. Come on AJ’s put the flag back and don’t let the radical minority dictate to you.

stupid by the day.

Every record has been destroyed or falsified, every book has been rewritten, every picture has been repainted, every statue and street and building has been renamed, every date has been altered. And that process is continuing day by day and minute by minute. History has stopped. Nothing exists except an endless present in which the Party is always right."          - Winston Smith in George Orwell’s 1984 Historical events are what shapes our future. It is akin to burning books to delete it. RES .

PC gone to far out of hand.put the flags back out for sale,its older than anyone living

looks like the cancel culture woke brigade have bought their BS to our shores. just goes to show how utterly pathetic these "easily offended" social justice types have become.

The world is becoming far too sensitive. At this rate the colour black, brown and yellow will be banned, but of course the colour white will be allowed to remain because racism is only one way..............not!! We all need to be sensible about what is real racism and what are historic events. We shouldn’t wipe out historic events that are represented somehow because today’s people need to be reminded of the atrocious way in which some groups were treated by other groups and how much the world has changed for the better.

so one person can dictate what a store can and can’t sell now. these people should get a life and stop their one eyed ideas. this is just pc gone completely mad.

Sad to see that something that might ’offend’ a tiny fringe of humanity, can have such an influence on the rest of us. I am offended that AJ’s have taken the historic flag down!!! Put it back please!