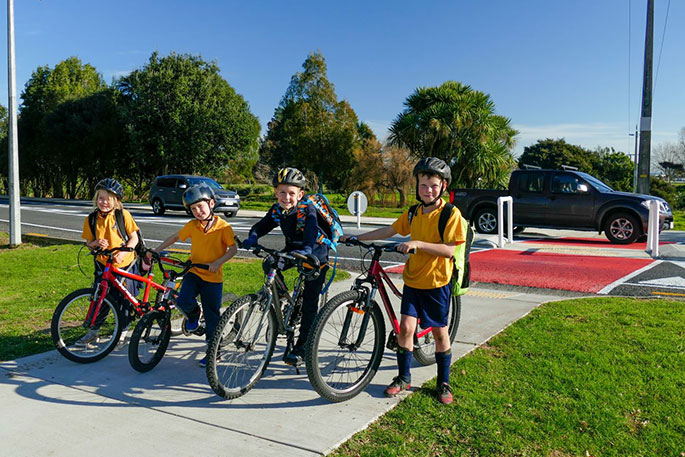 Pedestrians and cyclists are already benefiting from a new courtesy crossing installed on Hinemoa Street recently.

Located near the Awatapu Lagoon, the crossing includes ‘dragon’s teeth’ and ‘red carpet’ road markings, and a centre refuge island.

Part of the Whakatāne District Council Active Whakatāne Strategy, the crossing is one of a series of initiatives that will be implemented.

Manager Transportation Martin Taylor says creating safe accessways throughout the district is one aspect of the strategy.

“Active Whakatāne was developed with our communities to create a collective vision for active transport,” he says.

“Installing crossings such as this one enables people to bike, walk and scoot between places safely.”

Bike Whakatāne representative, Richard Hamer, believes the Active Whakatāne Strategy is an exciting project that will make a signifcant impact on how residents and visitors experience the Whakatāne District.

He is also impressed with the design of the new Hinemoa Street crossing and looks forward to the implementation of similar structures throughout the district.

“This particular design is excellent, because drivers see the crossing as they approach the area and have plenty of time to slow down, and pedestrians and cyclists can cross safely,” he explains.

“It means people are able to use the shared path between King Street and James Street with confidence.”

The crossing was trialled with temporary traffic management.

Council staff received positive feedback, and also took into account concerns raised by the public when finalising the design for the permanent fixtures.

Taylor says the trial was a valuable exercise that ensured frequent users of the area were able understand how it would work.

“We know it is high-use road for large trucks and an arterial route for school traffic,” he says.

“However, the trial period produced positive results, which confirmed the crossing will be an asset in the area.”

The dragon’s teeth and red carpet markings are also being trialled at a crossing point on Rewatu Road, to test its effectiveness in a semi-rural environment.

Is this a courtesy crossing which actually works? Very different on Tauranga’s Cameron Road and Fraser Street. There courtesy is practically non-existent,especially in wet weather. Perhaps motorists in Whakatane have better manners.

What are the road rules around these courtesy crossings? Does normal pedestrian crossing rules apply? It’s a great idea but at least explain the rules. Perhaps Sunlive could look into this and do an ’explanation’ article . . .