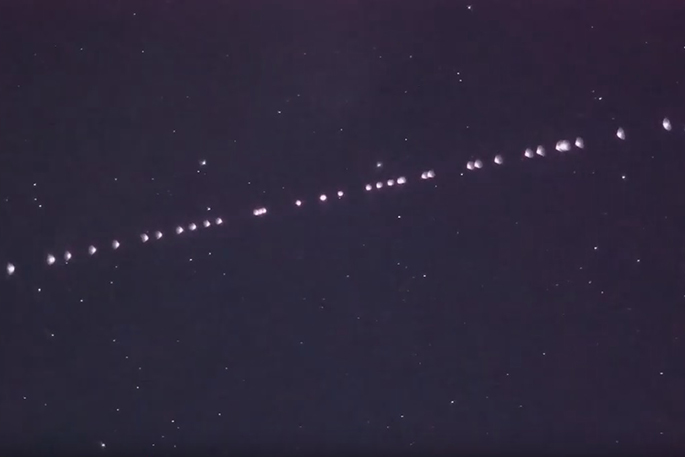 After launching the satellites appear as a long train moving across the sky.

The Tauranga Astronomical Society have advised that, weather permitting, the Starlink 9 satellite train will be visible in the sky over New Zealand tomorrow night.

A SpaceX Falcon 9 launched the latest set of the SpaceX’s Starlink satellites, along with two BlackSky imaging satellites on August 7 after weeks of delay.

This latest group of satellites will be passing up the length of New Zealand on Monday evening August 10, says the society’s president Dave Gregg.

“As seen from Tauranga, the Starlink9 satellite train will rise in the South West, visible from about 6.44pm,” says Dave.

“It will pass below the Southern Cross and Pointer stars as it crosses the south eastern sky, before passing just above Jupiter - the very bright star-like object in the East.

“The first satellites in the train are predicted to pass into the shadow of the Earth in the East North East at almost 6.50pm.  The rest of the satellites will follow.” 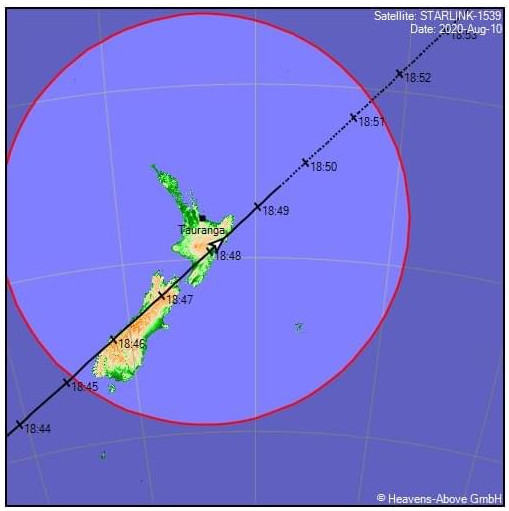 SpaceX successfully launched the 57 Starlink internet satellites and two small Earth-imaging satellites into orbit on August 7 in the second of what's expected to be a series of Starlink rideshare missions.

Amy Thompson reported on the launch rocket landing at sea and the continuing growth of the internet megaconstellation, on Space.com following the SpaceX launch on Friday.

A two-stage Falcon 9 rocket carrying 57 SpaceX Starlink satellites, along with two BlackSky Global Earth-observation satellites, lifted off at 1.12am EDT from Pad 39A at NASA’s Kennedy Space Center.

It was the fifth launch for this Falcon 9's first stage. And the booster pulled off yet another landing, settling softly onto the deck of SpaceX's "Of Course I Still Love You" droneship in the Atlantic Ocean about eight minutes after liftoff.

This is SpaceX's 10th Starlink mission since 2019, and the company's 12th overall mission for 2020. SpaceX has been relying on its fleet of used, flight-proven boosters to sustain a rapid launch cadence. The company has had a stellar summer, with the launch and landing of two NASA astronauts on the Demo-2 mission to the International Space Station — a first for a private company — and isn’t slowing down anytime soon.

Tucked inside the Falcon 9's nose cone was a stack of 57 internet-beaming satellites. Part of SpaceX’s Starlink megaconstellation, the satellites will join hundreds already in orbit. To date, the company has launched 595 Starlink satellites as it works to complete the huge constellation.

SpaceX founder and CEO Elon Musk has said that SpaceX needs between 400 and 800 Starlink satellites in orbit to begin to roll out minimal coverage. As that goal draws nearer, SpaceX has been teasing the arrival of a beta program, which will help the company test the service for eventual worldwide consumption.

SpaceX is also taking other steps to make Starlink service a reality. For example, the company has gained approval from the U.S. Federal Communications Commission for up to one million user terminals.

Musk has said that he wants the terminals to be easy to operate. Resembling a "UFO on a stick," as Musk calls it, each terminal is equipped with actuators to ensure that it points at the sky at all times. All a user has to do is plug it in and point it at the sky.

Hitching a ride with the Starlink stack were two small, Earth-observing satellites for BlackSky. The rideshare was arranged by another company called Spaceflight, which finds rides to space for smaller satellites. SpaceX also has its own rideshare program, which books small satellites directly instead of going through a third-party service.

The Starlink satellites on this mission are a bit different than the ones that have launched previously. That's because they're outfitted with a special visor that will help reduce their apparent brightness.

The sunshade, as SpaceX is calling it, is a deployable visor designed to prevent sunlight from reflecting off the shiniest parts of the satellites, such as the antennas. The company — as well as astronomers and dark-sky advocates around the world — are hoping to decrease the Starlink fleet's overall brightness. This will enable them to appear as dark as possible in the night sky, thus minimizing their impact on night sky observations.

When the very first set of Starlink satellites launched, it caught the astronomy community off guard as the satellites appeared brighter in the sky than SpaceX intended. Scientists around the globe voiced their disapproval, concerned that the bright satellites would inhibit scientific observations.

A previous Starlink launch back in June featured one satellite outfitted with the experimental visor; today's mission is the first in which all 57 sport it.

More on Amy Thompson’s report can be read here

Across NZ on Monday night

For observers further south on Monday night, Dave Gregg says to be ready two to three minutes earlier than the Tauranga times.

“For observers in the South Island, Wellington, and lower North Island, Starlink will be at its highest in your north western sky.” 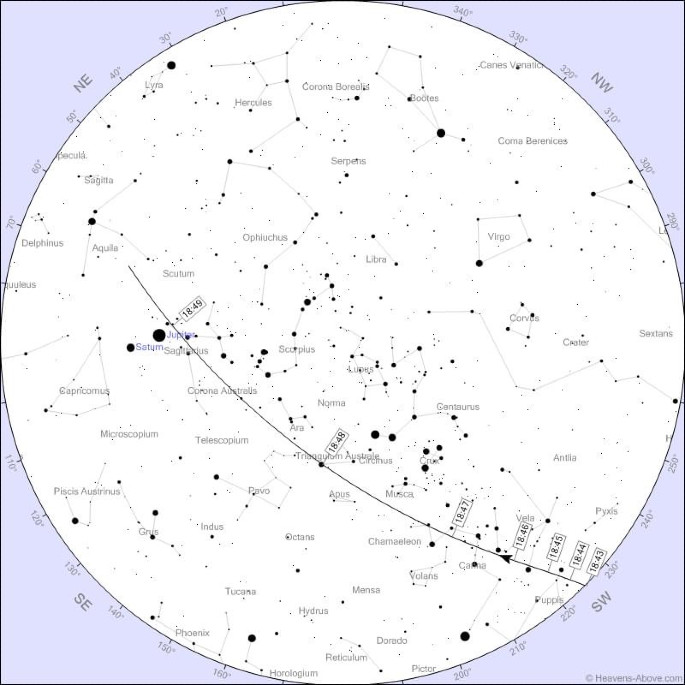 Please note that the sky charts show East on the left and West on the right because it is meant to correspond to the sky over your head, and not the ground under your feet like a map of the earth. You have to imagine holding the chart above your head to use it, and then the directions are correct.

The info and charts shown here are from the Heavens-Above website. The observing location is set to Tauranga / BOP.

“You might want to set a reminder alarm on your phone,” says Dave.

It makes you wonder though... all this stuff has to come down and it maybe won’t ALL burn up in the atmosphere... Not to mention the job of plotting every bit of "space junk" so that new missions are not endangered. Meantime, it is certainly a spectacular sight in our skies.