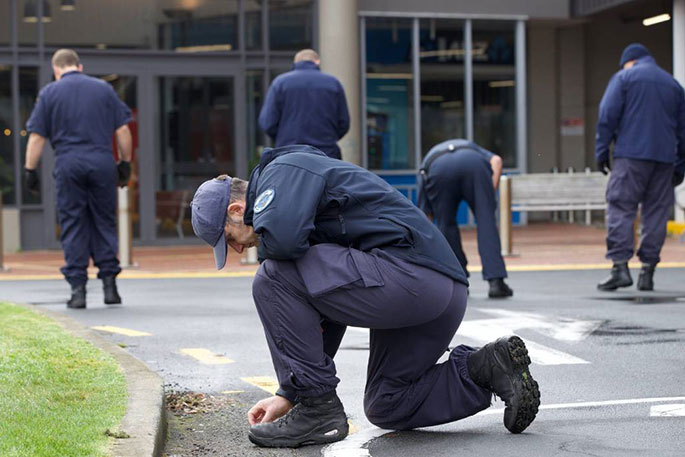 Police say two of the devices had already gone off before they were notified. Photo: Tom Lee/Stuff

UPDATE 12.52PM: Police can confirm the Chartwell Shopping Centre in Hamilton has reopened and cordons are no longer in place following an incident this morning where explosive devices were located.

No further items of concern have been located following a comprehensive search of the area by police, says a police spokesperson.

"A detailed update will be provided to media at the press conference at 2.15pm at the Hamilton Central Police Station."

Two homemade bombs detonated at a Hamilton mall may have been used in an attempt to crack open an ATM machine, police say.

Police’s Specialist Search Group are in attendance at Chartwell Shopping Centre in Hamilton where several home-made explosive devices were found this morning.

The New Zealand Defence Force Explosive Ordnance Disposal Team is also at the scene at what appears to be an attempt to rob one of two ATMs on the mall’s ground floor.

A cordon remains in place around the shopping centre, which is closed, says a police spokesperson.

"This has been extended to include the Lynden Court area, in order to keep the public safe.

"The Specialist Search Group is undertaking a comprehensive search of the shopping centre and surrounds, to ensure nothing of concern is left unnoticed."

Police say this appears to be a targeted attempt at damaging an ATM, located on the exterior wall of the shopping centre at its southern end.

"Initial indications suggest two devices had already detonated before Police were notified, with damage contained to the ATM and immediate surrounds, with no injuries to any person.

"The focus of all in attendance is ensuring the safety of the public and every care is being taken to ensure no further risk remains."

Anyone who is making home-made explosives is a danger to the community. Today it is motivated by greed, but tomorrow it could be political...