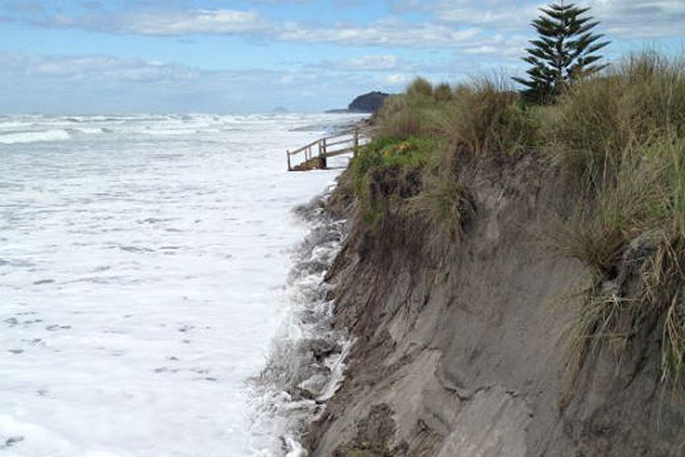 Coastal ecosystems have been identified as at risk due to sea level rise and extreme weather events by the National Climate Change Risk Assessment. File image/SunLive.

The release of the National Climate Change Risk Assessment shows the progress the current government has made to help solve the climate crisis.

“Because of this report, we can see clearer than ever that the action our government is taking to reduce emissions is essential for making sure we pass on a safer planet to our children and grandchildren,” says Minister for Climate Change James Shaw.

The Risk Assessment outlines for the first time the significant environmental, social and economic risks New Zealand faces as a consequence of climate change.

“Many of the risks we face can be traced back to the failure of previous governments to take any meaningful action to cut our emissions.

“However, whilst most New Zealanders already know that climate change is a problem, what we haven’t had until now is complete picture of exactly what the consequences of this previous inaction are.”

The Risk Assessment is based on a high emissions, business-as-usual future, resulting in a projected 67cm sea level rise and three degrees Celsius temperature increase by 2090.

“Communities across New Zealand are already experiencing the effects of a changing climate, however, that does not mean our goal of preserving a safe climate for the future is not within reach. Because it is. “That’s why this Government has spent the last three years putting in place some of the world’s most ambitious climate change policies.

“Whether it’s passing zero carbon legislation, fixing the Emissions Trading Scheme, or supporting public institutions to switch to clean energy, we have been working to avoid worst impacts of climate change since the moment this government formed. We know the window of opportunity is small and the task is large, but we have shown again and again that we are equal to the challenge ahead.”

The risk assessment will now be used to develop a national adaptation plan over the next two years.

“Cutting our emissions is obviously a huge part of what we need to do to create clean, safe and healthy communities for ourselves, our loved ones and future generations.

“However, the climate is already changing and there will be some effects that we cannot avoid. So, in addition to driving the transition to a zero carbon New Zealand, this government is also working to ensure our communities are made much more resilient to the unavoidable effects of global climate change.”

About the Risk Assessment

The National Climate Change Risk Assessment identifies 43 risks that could have a major or extreme consequence to New Zealand.

Of these, there are 10 risks the reports says require urgent action in the next six years.

The 10 most significant risks identified are:

The Government is required to respond with a National Adaptation Plan within two years of the publication of each climate change risk assessment.

If this was backed by actual historic scientific data most of the dialogue would be missing.

...this is just a small part from the Ministry for the Environment .... "The risk assessment was based on Arotakenga Huringa Āhuarangi: A Framework for the National Climate Change Risk Assessment for Aotearoa New Zealand and was undertaken over nine months by a diverse, multi-disciplinary team of academics and consultants. It combines the outcomes from Māori/iwi and stakeholder engagement with scientific, technical and expert analysis. The findings will be used to develop a national adaptation plan that will respond to the most significant risks, opportunities and knowledge gaps." So now we know with academics and consultants, maximum bullshit, maximum cost, little if any tangible or meaningful result...just great!...roll over..tummy ’tickle time’ guys!