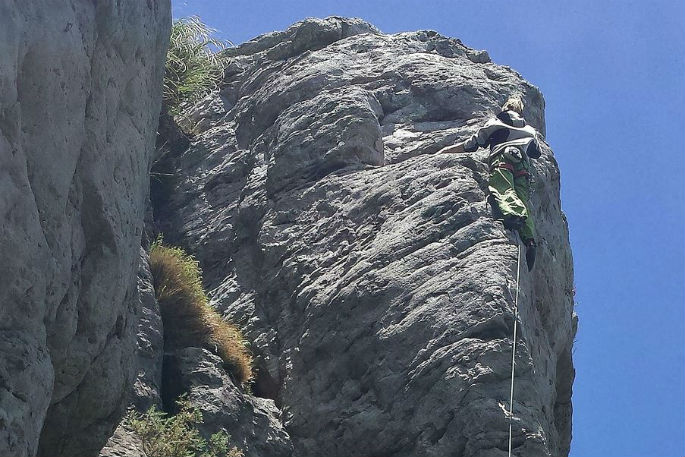 Mauao’s Joint Administration Board, Nga Poutiriao o Mauao, has decided not to approve the use of sport rock climbing routes on Mauao.

The decision, made at the Board's July 22 meeting, comes in response to an application by the rock-climbing community to be granted permission to climb on specified routes on the maunga.

The Board’s decision was made in line with the Mauao Historic Resource Management Plan, which outlines that the Board include consideration of the effects on a rare fern, wahi tapu sites and public safety.

The Board held overall concerns about the health and safety of the activity to climbers and other users of the mountain.

Nga Poutiriao o Mauao is a joint administration board set up under a memorandum of understanding between Tauranga City Council and the Mauao Trust.

Mauao, or Mount Maunganui, the dormant volcanic cone at the end of a peninsula by the town of Mount Maunganui is considered important and tapu by the local iwi, featuring extensively in local mythology. The summit is 232 metres above sea level.

Mauao is the historic reserve that represents the physical remains of about 800 years of human occupation. It is home to many pa sites, natural springs, nesting birds, native coastal forest, and a flock of sheep that graze on the cleared pasture areas, and contains many walking tracks to and around the summit.

In 2017, rock climbing was allowed to continue on Mauao, but with conditions around safety.

In addition, the Board decided it did not support the drilling of new holes. New holes are periodically required by climbers to allow the replacement of climbing bolts or anchors to ensure sport climbing can continue to be undertaken safely. The Board found this practice to be unacceptable due to its invasive nature, which went against the Board’s responsibility to protect the cultural and spiritual values of the maunga.

Board Chairman, Dean Flavell, said the Board is responsible for protecting Mauao and other users by ensuring that it is safe for everyone to enjoy.

“Although we understand the disappointment this decision will cause the rock-climbing community, we had ongoing safety concerns, which could not be addressed to the Board’s satisfaction,” says Dean.
“We feel this decision safeguards the vast number of users of Mauao and fulfils our responsibility to protect the historical, cultural and ecological values of the maunga.”

Recreational rock climbing is overwhelmingly a white activity (check the forums around the world). If it had been maori activity, there would have been no objection. The Council is supposed to represent everyone as well as uphold the statutes: "the Mount should remain a Recreational Reserve with all its active functions".

In terms of the Recreation Reserve use as set out in all the Statutes and also in Council’s official Visitor presentation of the Mount, Mauao should remain a Recreational Reserve with all its active functions. The Council is on the Mauao Trust Board and its administration should support the community that has always felt its own intrinsic mana with the Mount in all its activities. This is another iwi governance under the guise of cultural possession.

People have been rock climbing for years without any issue. At least they are being active and enjoying themselves. Why do we get over precious when there is no real harm being done.

there can’t be any money in it for them

Thank you for the geological background to this article, especially the bit about the mount being a ’dormant volcanic cone’. A dormant volcano is one which has a known eruptive history and is likely to erupt again...think Mayor Island, Ngaruahoe, Egmont, Ruapehu, Taupo. Would you have us all running scared at the identification of the mount as likely to erupt one day? The descriptor ’remnant volcanic cone’ would surely be much more appropriate.