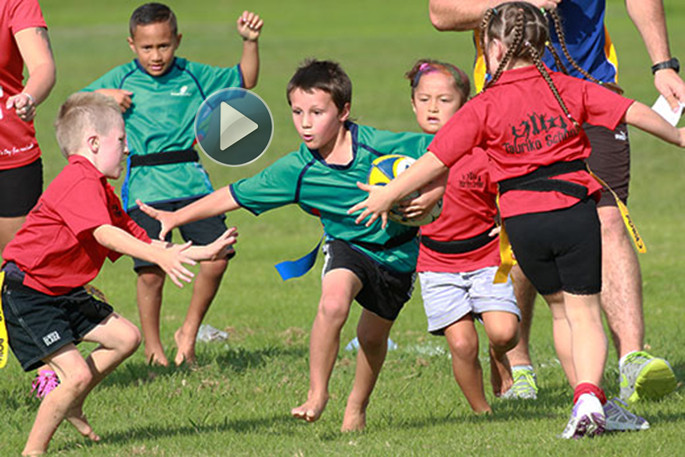 “The schools involved are all lower decilled and are predominantly the smaller sized schools,” says an RIP Rugby spokesperson. “Played across four consecutive Mondays from 3.30pm – 5.00pm, the kids will get to experience RIP rugby, some for the very first time.”

RIP Rugby, or quick rip as it was previously called, is a version of 7s rugby, except its played on half a field and there’s no tackling.

“Instead the players wear a velcro belt around their waist with two tags, one on each hip. There’s kicking allowed, non-contested three-person scrums where the feeding team wins the ball and contested but no lifting lineouts.

“Advantage can be played and as the kids get better it can become fast and exciting. Given the non-contact nature, the teams are mixed, with boys and girls playing together.”

The other unique feature of this competition is that it is non-competitive. Teams can keep score if they want to, but there are no points on offer, no table and no overall winner at the end.

“This is an exciting time for Eastern Bay junior rugby,” says Community Rugby Manager Pat Rae. “While we’ve had one off rippa rugby days in the past, we’ve never had a full blown four-week consecutive module before.

“The other exciting thing about this is we’ve deliberately targeted non-traditional rugby schools, smaller schools, schools with kids who come from communities that might not otherwise have opportunities to play organised sport.

“Here’s a version of rugby that is fun, safe, involves boys and girls and easy to get involved. Equipment wise, Bay of Plenty Rugby provides it all. The kids and their mums and dads can just find their teams in the draw, rock up 10-15 mins beforehand and play,” says Pat.

Eastern Bay of Plenty Junior Rugby officer Moana Hona-Rangiaho, a Kawerau resident is the brainchild and driving force behind the concept.

“Moana has been awesome for Eastern Bay junior rugby,” says Pat. “She, along with her volunteer committee delegates were instrumental in getting Saturday morning junior rugby up and running last weekend and Moana generated the enthusiasm for this RIP Rugby module to get off the ground.”

The referees for this module will also all be new.

“A number of current secondary school rugby players have kindly offered to support their younger peers by taking the step up to referee. Just like the players will be learning, so too will these refs and as a bonus, they’ll receive a small amount of pocket money to reward them for their service,” says Pat.

“Refereeing RIP rugby provides new referees with a softer option to start refereeing careers instead of learning to be a referee in the full tackle version of the game,” says Community Volunteers Development Manager Cam Russell.  “The skillsets are the same, without having to worry about safe tackling or contested scrums.

“It’s really important that we wrap support around these secondary school students who are embarking on their refereeing career to add to their playing career.

“Providing them with a real fun experience is paramount to ensuring these types of modules can be services with referees who receive quality training so the kids playing can have fun as well.”